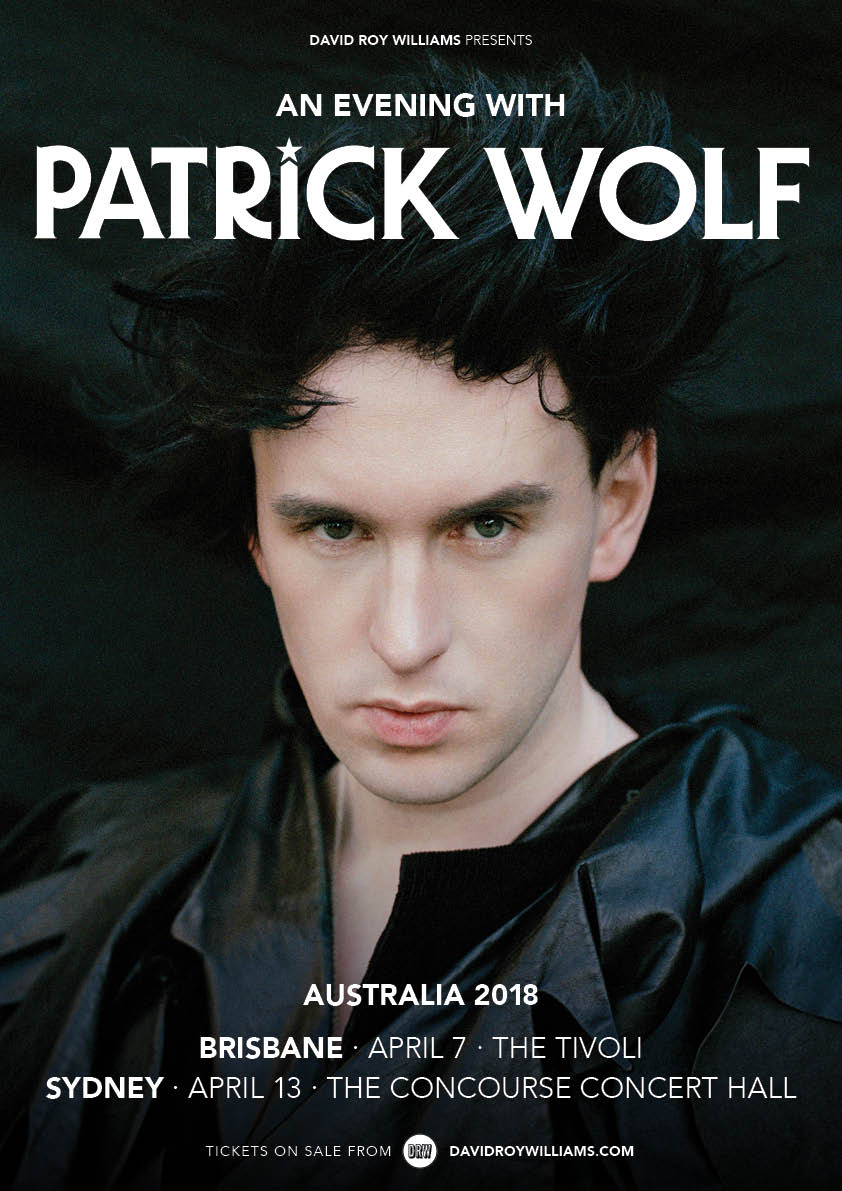 Alongside representing the UK at the Commonwealth Games Great Australian Songbook concert, the extraordinary multi-instrumentalist Patrick Wolf has announced two intimate solo concerts in Brisbane and Sydney this April.

Patrick Wolf the flamboyantly eccentric troubadour returns after an absence of six years, to hauntingly present his otherworldly stories with his own accompaniment on tenor guitar, viola and grand piano.

“An Evening With Patrick Wolf” is curated by me personally. I want to make every fan feel as if I’m welcoming an old friend through the doors to my studio and sharing the song and word I’ve created over the last 15 years.” Patrick Wolf

Hailing from South London, the visually striking indie singer-songwriter is known for his confessional vocals and eclectic musical style.  A self-trained pianist, singer and producer, Wolf is also a classically-trained violinist, harpist and composer, yet it is the imagination and ingenuity in his songwriting that have led to universal acclaim.

Patrick’s music features elements of chamber-pop, mainstream pop and alternative rock with both traditional folk influences as well as experimental genres such as electronica and noise.  Lyrically, Wolf also takes on both the traditional and the modern, evoking Western mythology and folk imagery while satirizing modern politics and celebrating queer romance.

I am planning the first half to be from the first two albums. For the second half I’ll be using some electronics and backing beats and will feature The Magic Position and onwards. The show features nearly two hours of music so I’m really hoping fans will leave feeling elated. Patrick Wolf

Since the start of his career in 2002 (at the age of 19), Wolf has released six albums and three EPs, and toured to an ever-growing international audience, including an expansive list of collaborators.  Within the last 10 years Wolf has collaborated with musicians such as Patti Smith, Angelo Badalamenti, Florence Welch, Marianne Faithfull, Eliza Carthy, Coco Rosie as well as art-world luminaries such as Nan Goldin, Wolfgang Tillmans, Tilda Swinton and Ryan McGinley.

“His music from the outset was harmonious, with thick textures and jazzy elements that provided a wash of impressionistic, colourful sound.” (theupcoming.co.uk)