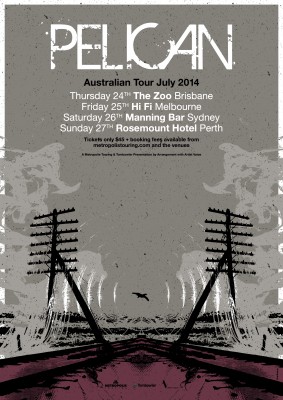 After a short hiatus and armed with their first studio album in four years, 2013’s Forever Becoming, US post-metal torchbearers, Pelican, are set to make a thundering return to Australian shores this July for a set of spectacular musical journeys that will leave their fans in awe.

Pelican are known for serving up walls of sound comprised of “percussive repetition, overtone basslines, and nuanced guitar riffing” (Allmusic), there is no better place to witness such grandeur than in a live setting.

Having constantly refined themselves since their debut, 2003’s critically acclaimed ‘Australasia’, Pelican have pioneered a subgenre that they remain leaders of to this day. Their instrumental excursions are the very essence of caustic heaviness and cathartic melody infused with ambient complexity and otherworldly vibration.

Pelican’s Australian fans are in for some magic as the iconic instrumentalists’ masterfully translate the “wide variety of musical emotions and atmospheres” (Metal Injection) of their records into intricate and brutally astonishing masterpieces packed with pure emotion and heaviness and executed with infectious levels of energy.

With a massive sound and rawness that will leave mouths agape, minds mesmerized, feet stamping, and fists pumping with adrenaline-fueled enthusiasm, you’d be crazy to miss this one!