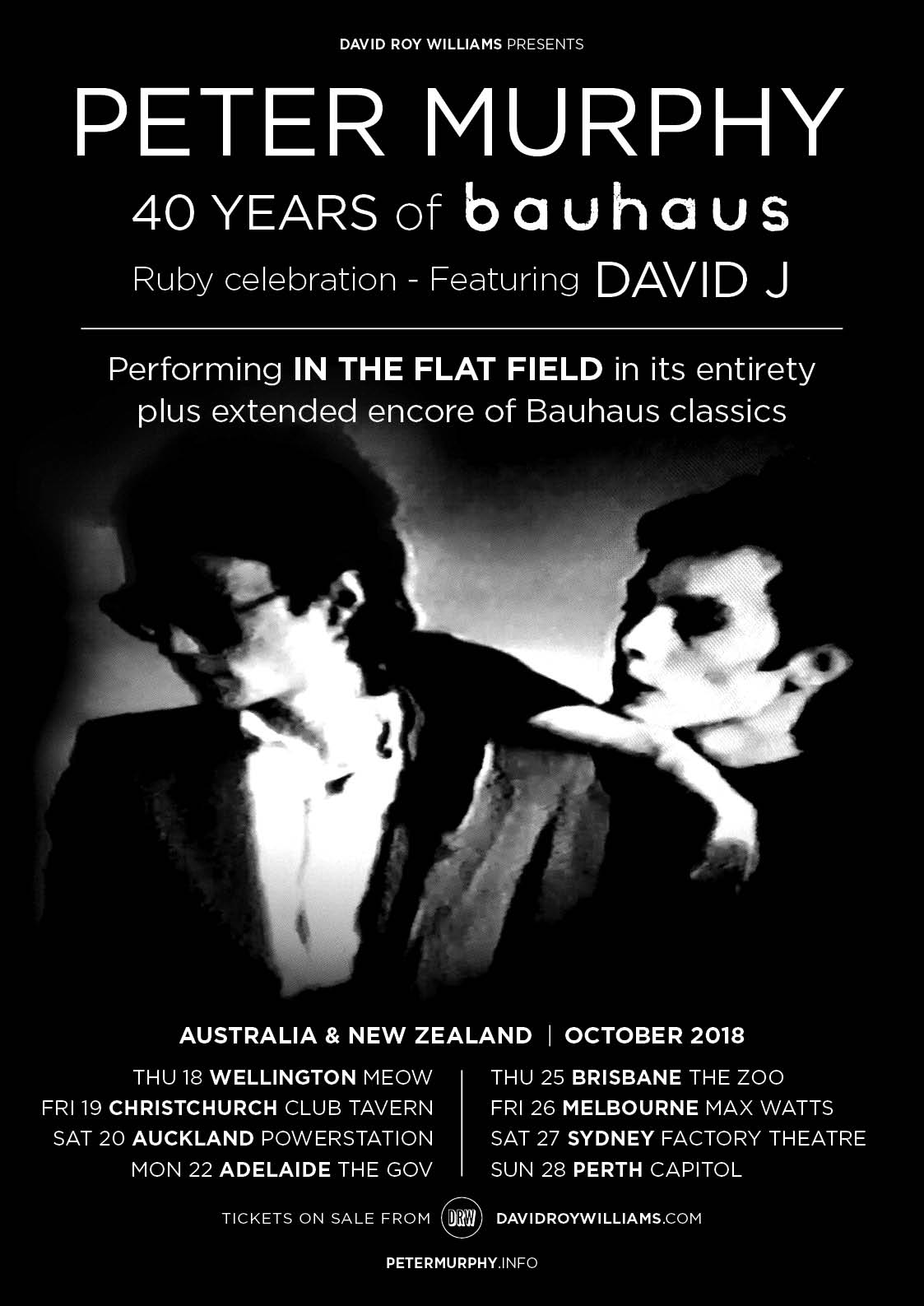 Peter Murphy first made his mark fronting influential UK group Bauhaus, who this year celebrate their 40th anniversary. Bauhaus appeared out of the London post-punk scene in 1978 and with their darkly romantic image and brooding songs like “Bela Lugosi’s Dead”, quickly became the touchstone for the nascent goth movement.

The man referred to by many as the God Of Goth rarely plays small clubs but his love of New Zealand and its people has inspired him to bring his show just about as close as you can get.

For this first New Zealand tour in five years, Peter will be joined by Bauhaus co-founding member David J and will be performing In The Flat Field in full.

VIP MEET & GREET Ticket includes:
Meet and Greet with the Artist
Photo with the Artist on the fans own phone or camera
Limited edition A3 Thick Card Poster signed by the Artist
Exclusive T-Shirt unavailable elsewhere
Admission to Sound-check
Official commemorative VIP Laminate
Priority Access to the Venue

Performing In The Flat Field in full, Peter will be joined on this tour by Bauhaus co-founding member David J.

DRW Entertainment is proud to present the return of iconic front man Peter Murphy to Australia for the first time since 2013.

Bauhaus, with Peter Murphy at the helm and David J’s soul wrenching bass, helped take goth mainstream, culminating in an appearance in David Bowie’s 1983 film “The Hunger”, noted by Rolling Stone as one of the greatest rock ‘n’ roll film movie moments of all time. Murphy then set forth on his internationally acclaimed solo career, and his pioneering and long-lasting influence was reinforced when Trent Reznor brought him in as a collaborator and Nine Inch Nails guest in the late 00’s, and when he made a cameo appearance – as “The Cold One” – in “The Twilight Saga: Eclipse” in 2010.

Peter Murphy will be reunited with David J on this tour and promises a set comprising the classic Bauhaus debut album In The Flat Field plus other brilliant works from the Bauhaus canon which includes such gems as “She’s In Parties”, “Kick In The Eye”, “Terror Couple Kill Colonel”, “Hair Of The Dog”, “The Passion Of Lovers”, “The Sky’s Gone Out”, “Telegram Sam”, “Hollow Hills”, “Dark Entries”, Third Uncle”, “Spirit”, “Lagartija Nick”, and of course “Bela Lugosi’s Dead” and their amazing rendition of David Bowie’s “Ziggy Stardust” .