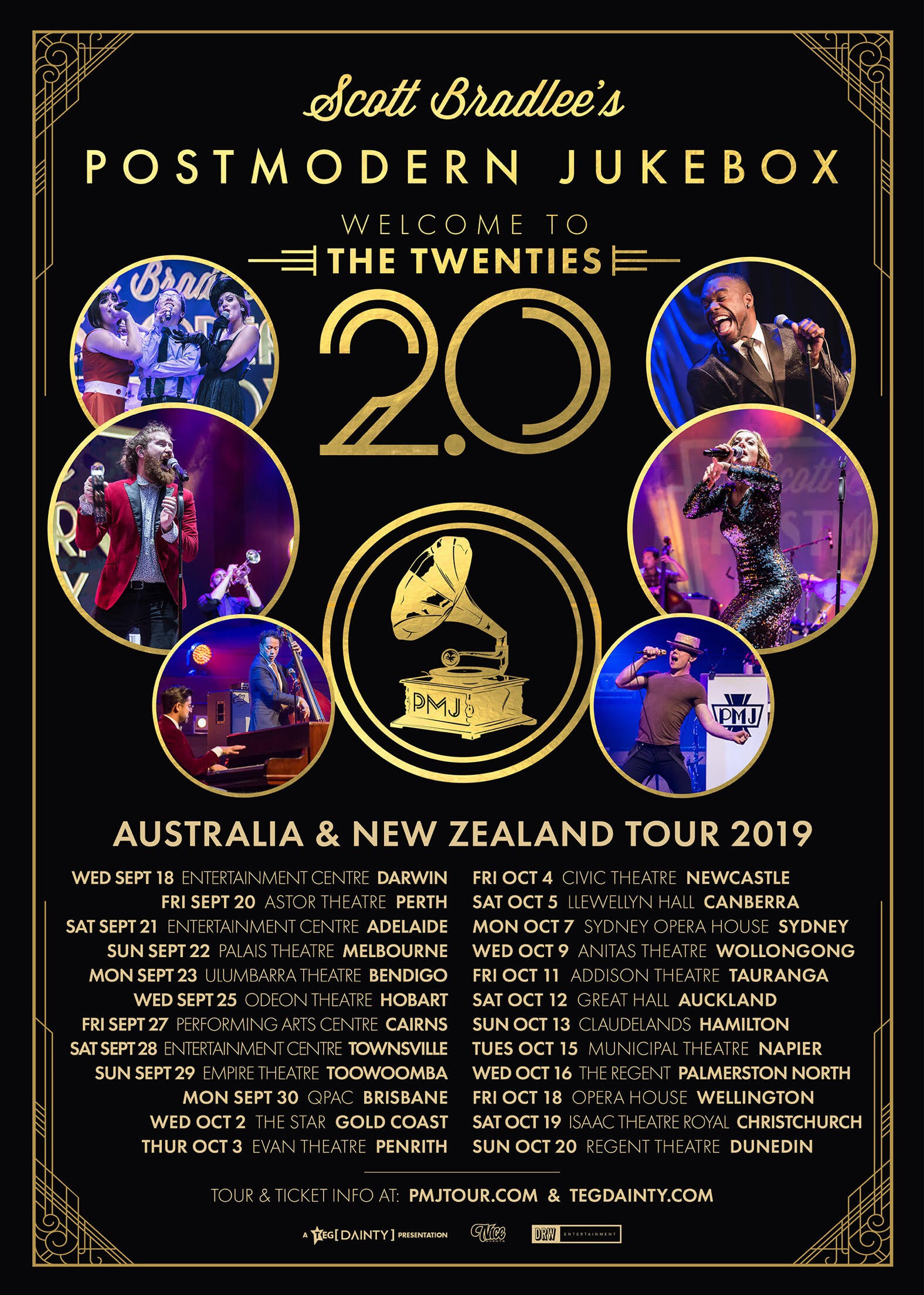 TEG Dainty, Nice Events and David Roy Williams Entertainment are excited to announce that Postmodern Jukebox will return to Australia and  New Zealand in September and October 2019 following four hugely successful tours in as many years. The multi-talented collective will bring their re-imagined contemporary hits back to eagerly awaiting fans with a brand-new Welcome to the Twenties 2.0 show.

– 1 Commemorative VIP Laminate (Your pass to access the Meet & Greet)

For New Zealand – the tour opens up in Tauranga on Friday 11 October, and moves on to Auckland on Saturday 12 October, Hamilton on Sunday 13 October, Napier on Tuesday 15 October, Palmerston North on Wednesday 16 October, Wellington on Friday 18 October andChristchurch onSaturday 19 October before winding up in Dunedin on Sunday 20 October.

To usher in the upcoming Twenty-Twenties, the famed time-twisting musical collective will circumnavigate the globe and prepare the world for a new decade with their Welcome to the Twenties 2.0 Tour. Postmodern Jukebox creator Scott Bradlee hopes this new decade will see a return to the style and craftsmanship that typified the music of past generations.

“Last time around the ‘Twenties gave us Jazz, America’s one true art form. Who knows what is possible in the 2020s?” says Bradlee. “One thing that is for sure is that there are a lot of folks that are tired of the clickbait headlines, mindless reality TV, and smartphone addiction that has only served to divide people in the last decade. We’re using our small corner of the pop culture space to tell people to forget their troubles, and come join us for a night of celebrating true musical talent and timeless style – live and in real life.”

Postmodern Jukebox’s Welcome to the Twenties 2.0 Tour will host official Twenties 2.0 initiation performance parties in nearly 250 cities all around the world.

“When creating a touring version of the Postmodern Jukebox concept, we work on pairing the right talent with the right material and building a unique and amazing experience for Postmodern Jukebox fans,” Bradlee says. “Get ready for the most sensational ’20s party this side of The Great Gatsby.”

Started by Scott Bradlee in 2009, Postmodern Jukebox(PMJ) have gone on to amass over one billion YouTube views with 3.5 million subscribers, and have chalked up more than 1.7 million fans on Facebook. For the past half-decade, PMJ has toured the world, playing hundreds of shows to sold-out houses on six continents. They’ve also performed on showslike “Good Morning America,” topped iTunes and Billboard charts, and caught the attention of NPR Music, NBC News and a wide array of celebrity fans.