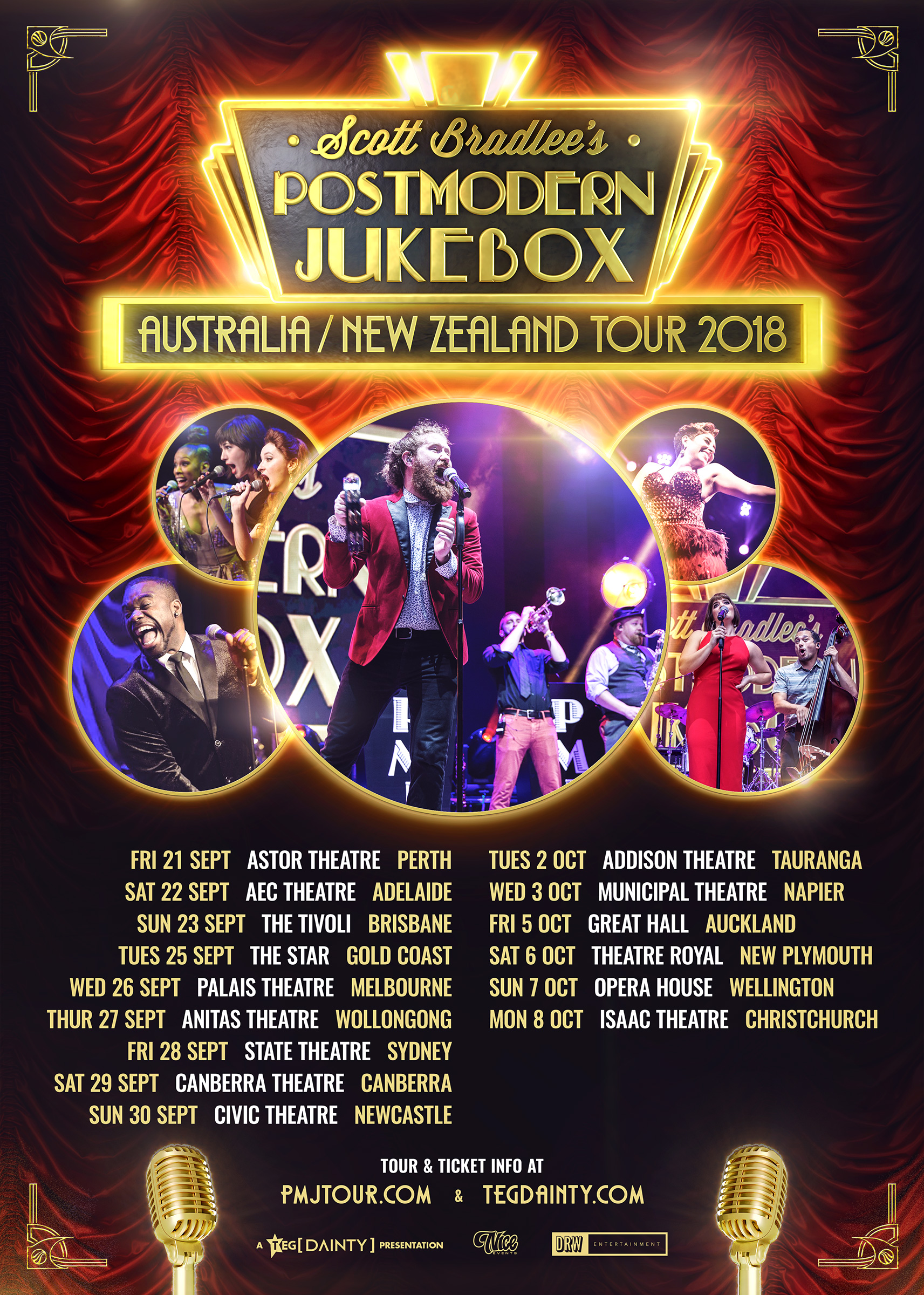 Australia & New Zealand love Postmodern Jukebox! Following three successful tours in as many years, the multi-talented collective will bring their re-imagined contemporary pop, rock and R&B hits in the style of various yesteryears back to eagerly awaiting fans in 2018.

Each time around, PMJ looks forward to bringing their unique spin on modern pop hits and retro pop stylings to new cities for the first time, as well as revisiting favourite haunts that welcome them back with eagerly open arms. And as any PMJ fan can tell you, the experience is never the same twice, with new songs, new sounds, and new members added to the ever-growing family each time around.

Since Bradlee created the project in 2009, PMJ has amassed more than 900 million YouTube views and 3.2 million subscribers, chalked up more than 1 million likes on Facebook, performed on “Good Morning America,” topped iTunes and Billboard charts, caught the attention of NPR Music and NBC News, and played hundreds of shows to sold-out houses around the world.

That seemingly exhausting pace hasn’t stopped Bradlee from arranging and recording new arrangements every week for PMJ’s legion of fans.

Imagine marrying the 21st century party vibe of Miley Cyrus or the minimalist angst of Radiohead with the crackly warmth of a vintage 78 or the plunger-muted barrelhouse howl of a forgotten Kansas City jazzman. Bradlee’s choice of material ranges from the ‘80s hard rock of Guns N’ Roses to hits as recent as 2015’s Justin Bieber plea “Sorry.” They’re rendered by a rotating cast of musicians and singers in fashions that date back to a time when Axl, Slash and Bieber’s parents had yet to be born – a time of street corner harmonies and torch singers, blues belters and golden-voiced crooners.

Last year, PMJ collected 18 favourites to compile The Essentials for Concord Records. The album featured the songs that Bradlee has called “most essential to the PMJ universe,” including hits by Beyoncé, the White Stripes, Lorde, Outkast and Maroon 5 – along with the song that put the band on the map, a vaudevillian distressing of Macklemore & Ryan Lewis’ “Thrift Shop” fronted by Robyn Adele Anderson that garnered more than a million views within a week of being posted. The pin-up styled singer returned for the album’s opener, their ‘50s doo-wop version of Miley Cyrus’ celebration of an inhibition-shedding spree, “We Can’t Stop,” which garnered more than 19.5 million views and was named one of the “9 Best Viral Cover Videos of 2015” by People magazine.

PMJ has long since outgrown the cramped confines of Bradlee’s small apartment in Queens, NY, where the original videos were shot at a time when he was one of countless struggling musicians in the city, to play some of the most heralded stages in the world. The spirit, though, has remained the same – a collective of musicians dedicated to the timelessness of music, performing songs vibrantly and without a trace of irony. And the media has taken notice: Entertainment Weekly wrote, “Scott Bradlee’s group is known for retro-fying modern hit songs into viral success,” while Yahoo! Music added, “if you’ve been on YouTube in the last couple of years, then you’re familiar with the everything-new-is-old-again brilliance of the viral phenomenon known as Postmodern Jukebox.”

“I take pride in putting together the right powers and personalities to create a unique and amazing experience for our fans,” Bradlee says. “We want them to escape reality and join us for the most sensational 1920s party this side of The Great Gatsby. We want them to experience what it was like to be at the New Years’ Eve show that Sinatra would have hosted in the 1940s. We want them to feel the excitement of hearing the greats of Motown live and up close. Our goal is to give our audiences their favorite show again and again and still have it feel like the very first time.”