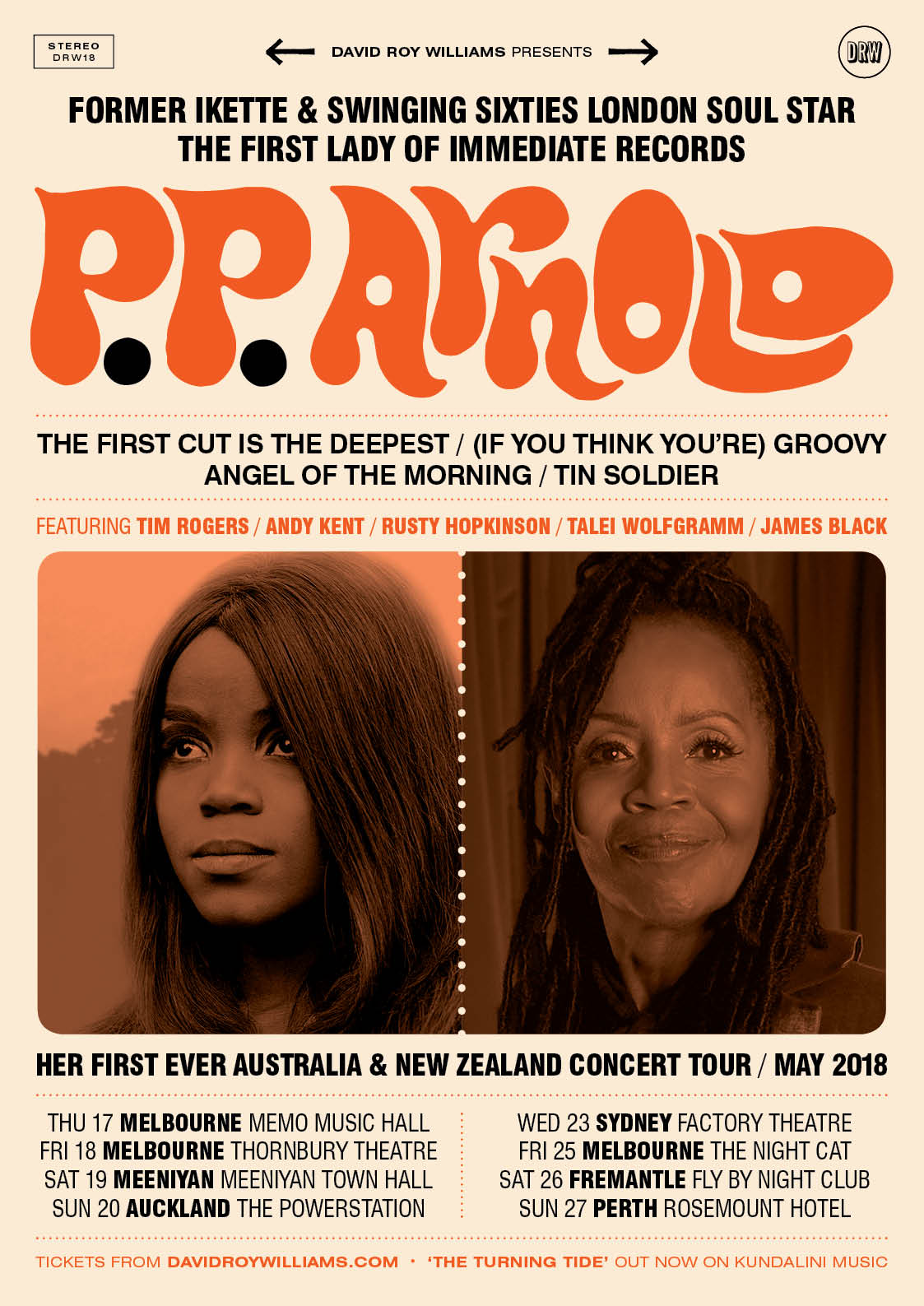 PP Arnold is a legend! The Los Angeles teenager, who became London’s First Lady of Soul after hitting town in 1966 with Ike & Tina Turner and coming to the attention of Mick Jagger, is still going strong. And she’s once again at the right place in the right time, as she has been so often in a that’s lasted over 50 years.

Best known for her beautiful and classic mid-to-late ‘60s hits including “The First Cut Is The Deepest”, “(If You Think You’re) Groovy” and “Angel of the Morning”, as well as the power chorus of the Small Faces’ iconic hit “Tin Soldier”, PP is set to undertake her first ever concert tour of Australia. She’ll be backed by a super group of super fans: Tim Rogers, Rusty Hopkinson, Andy Kent, Talei Wolfgramm and James Black.

PP’s tour down under follows the release last year of “The Turning Tide”, an album of unreleased recordings from the late ‘60s and early ‘70s, produced by both Barry Gibb and Eric Clapton. It cracked the UK Top 30 upon release, recently made the NZ iTunes Top 20, and has been the subject of many accolades and much airplay since its release.

Although this will be PP’s be first concert tour of these parts, she has previously performed here as a featured singer with Pink Floyd’s Roger Waters in 2002 and 2008. In recent times she has also recorded with Primal Scream, Oasis, Ocean Colour Scene and Paul Weller. She has a voice that other artists love to work with; her first duet was with Rod Stewart on a single produced by Mick Jagger, way back in ’67.

Her timeless work has earned PP an ardent following amongst fans of ‘60s British rock and pop in addition to lovers of classic soul, and some of her early dance numbers are considered Northern Soul classics. Her status as an icon of her era when she starred alongside old friend Marianne Faithful in the final episode of the original series of “Absolutely Fabulous” in 1996 (for which she and Marianne especially recorded a new version of the program’s theme song “This Wheel’s On Fire”).

With her memoir soon due for publication and a new album in the can, co-written and produced by the Ocean Colour Scene’s Steve Craddock and including a couple of duets with long-time supporter and fan Paul Weller, 2018 promises to be a big year for PP Arnold. Join PP and her dream Australian band for what will undoubtedly be amongst the most talked about tours of the year.