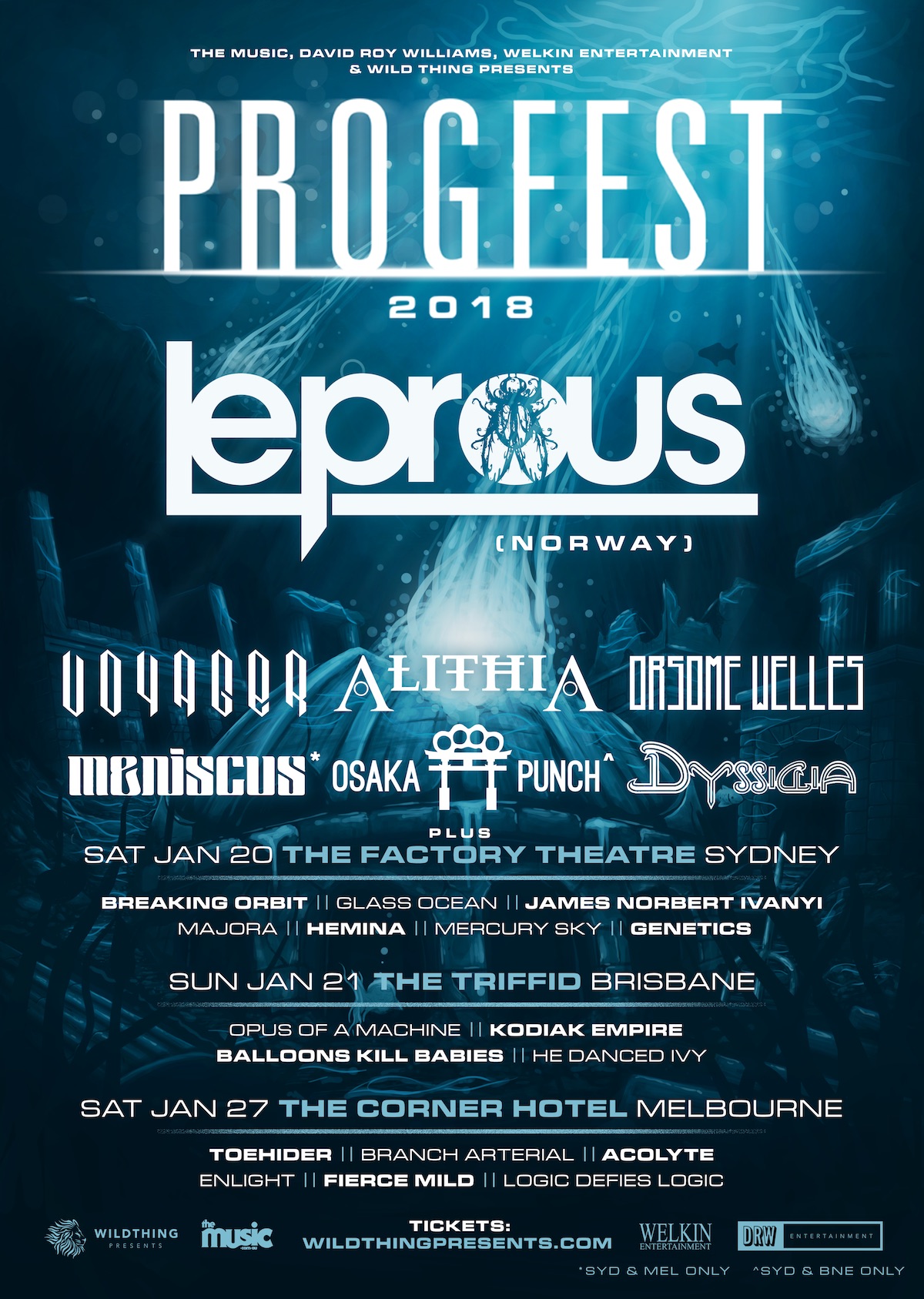 PROGFEST: A festival that celebrates all things progressive is back for 2018!

Progfest 2018 has expanded to include all three east coast capital cities, hitting Sydney and Brisbane along with returning to Melbourne, following its December 2016 sold out edition!

Featuring progressive bands of all styles and genres, from prog, post, psychedelic, art rock, metal and everything in between, PROGFEST is about showcasing bands that think for themselves; bands who rather than following the latest trends, have decided to challenge themselves musically and create music with depth and vision.

Beginning life in 2008, Progfest has grown along side Australia’s love of progressive music, and has become the centrepiece of the nation’s burgeoning prog scene. In the intervening years, the progressive scene in Australia has exploded and the bands associated with it are now a global force to be reckoned with. Many of the acts have gained huge followings from all over the world. Ne Obliviscaris, Caligula’s Horse, sleepmakeswaves and Twelve Foot Ninja have all headlined Progfest in the past, and each of them have gone on to crack the ARIA Mainstream chart and have global success.

The 2018 line up of Progfest looks to be their strongest yet with Norway’s LEPROUS confirmed to headline all 3 Progfest festivals, plus headline their own sideshows in Perth and Adelaide!

Stepping out of the shadows, Leprous have come into their own this year, performing to packed crowds on their European tour with Devin Townsend and becoming the ‘must see’ act of the Euro summer season. The band released their new album Malina in August this year to critical global praise and have crafted songs that are both catchy and progressive.

Featuring sophisticated and intricate textures that are woven around sublime harmonies and rolling post rock rhythms.

Joining Leprous are some of Australia’s finest acts including:

VOYAGER: Perth prog masters Voyager are one of the nations most recognised prog bands around the world.  With 6 albums under their wings and constant appearances at global festivals such as ProgPower USA, ProgPower Europe, Hammersonic and Euroblast, supporting the likes of Opeth & Deftones plus multiple national tours of their own, Voyager have their live act honed to perfection.

ALITHIA: Melbourne’s tribal space rockers AlithiA are about to embark on a 29-date European tour supporting Leprous (Norway) and Agent Fresco (Iceland). Imagine floating through the cosmos, out of body and out of mind on a space trip shaped by mutant riffs, driven by tribal percussion and a shamanistic feel.

MENISCUS: These Sydney instrumental post rockers seamlessly blend guitar-driven ambient soundscapes, hard-rock, electronic and psychedelic music with a striking visual element to their live performances that has captivated audiences since the bands inception in 2005.

DYSSIDIA: Adelaide’s foremost progressive metal act have crafted a unique sound amongst their peers. Their breathtaking motifs and intricate rhythms have lead to them sharing the stage with the kings of the global progressive scene.