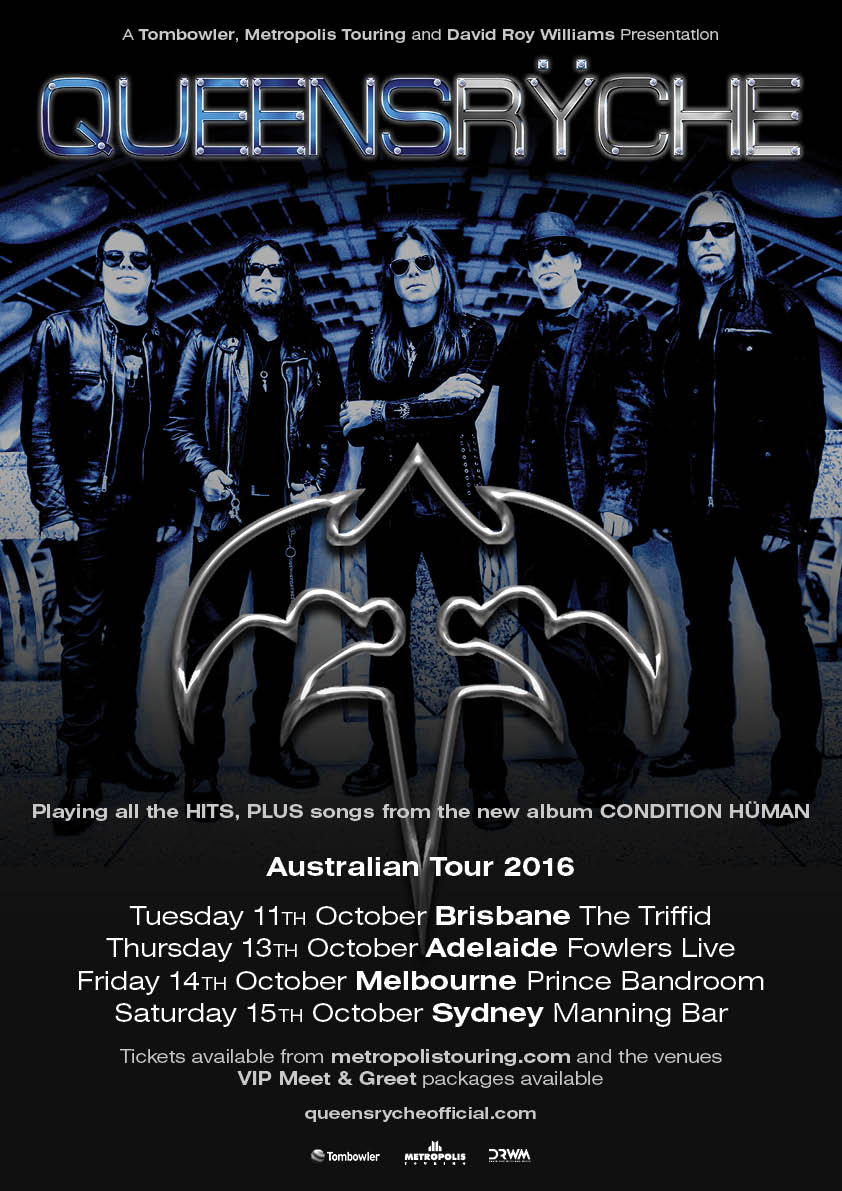 American Progressive Metal Legends, Queensrÿche return to Australia for their first tour in nearly a decade.

Having sold over 30 million albums around the world over the course of their storied 30-plus-year career, Queensrÿche’s triumphant legacy of progressive metal classics is one of the most celebrated in hard rock and heavy metal and the band’s revitalised line up has consistently delivered high-octane live shows combining the hungry fire of a new band with the tempered experience of master showmen.

“Everything about the show was excellent, the tone, tempo, pacing, track sequence, all of it was done very well by these profession veterans.” – https://www.metal-rules.com

Queensrÿche’s critically acclaimed new offering, “Condition Hüman”, sees vocalist Todd LaTorre deliver the performance of a lifetime on what is his sophomore album with the band, cementing his status as the only frontman with the pipes and presentation to front a Queensrÿche that delivers the high octane metal swagger fans have been longing for.

“the La Torre fronted version of the band is all too happy to give the crowd what they want – a set consisting almost entirely of the band’s prime-era material.” – https://www.chicagonow.com

Queensrÿche first burst onto the music scene in 1982 and very quickly gained international recognition and performed to sold out audiences around the world. With “The Warning” in 1984, and the ground breaking 1986 release of “Rage For Order” Queensrÿche continued to prove their worldwide dominance as one of the most respected and creative bands of the 80’s. In 1988 the band turned out yet another monumental album “Operation:Mindcrime”, which would go on to become one of the best selling concept records of all time, setting the stage for sold out performances across the globe. With the release of the critically acclaimed and commercially successful “Empire” in 1991, the band earned multiple Grammy Award nominations and won the MTV “Viewer’s Choice” award for the #1 chart topping hit “Silent Lucidity”. Since recruiting singer Todd LaTorre in 2012, the band has gone on to release two acclaimed “comeback” albums and perform hundreds of shows featuring crowd pleasing setlists of fan favourite anthems and old school classics – many of which have not been performed live since the 1980s!

“There is no question that LaTorre stole the show with his impeccable singing and screams.” – https://sleazeroxx.com

Queensrÿche have built a dedicated legion of fans through relentless global touring. In recent years, the fully revitalized Queensrÿche is in the throes of a jaw-dropping creative resurgence that demands to be seen live in concert. Having recently completed a stadium tour of the USA with the Scorpions, the band is in outstanding form as they prepare for their Australian tour!

“ The set-list was fantastic for an old-school QR fan like myself.” – https://www.metal-rules.com

Get ready for a set of Queensrÿche classics performed with power, passion and precision like never before!