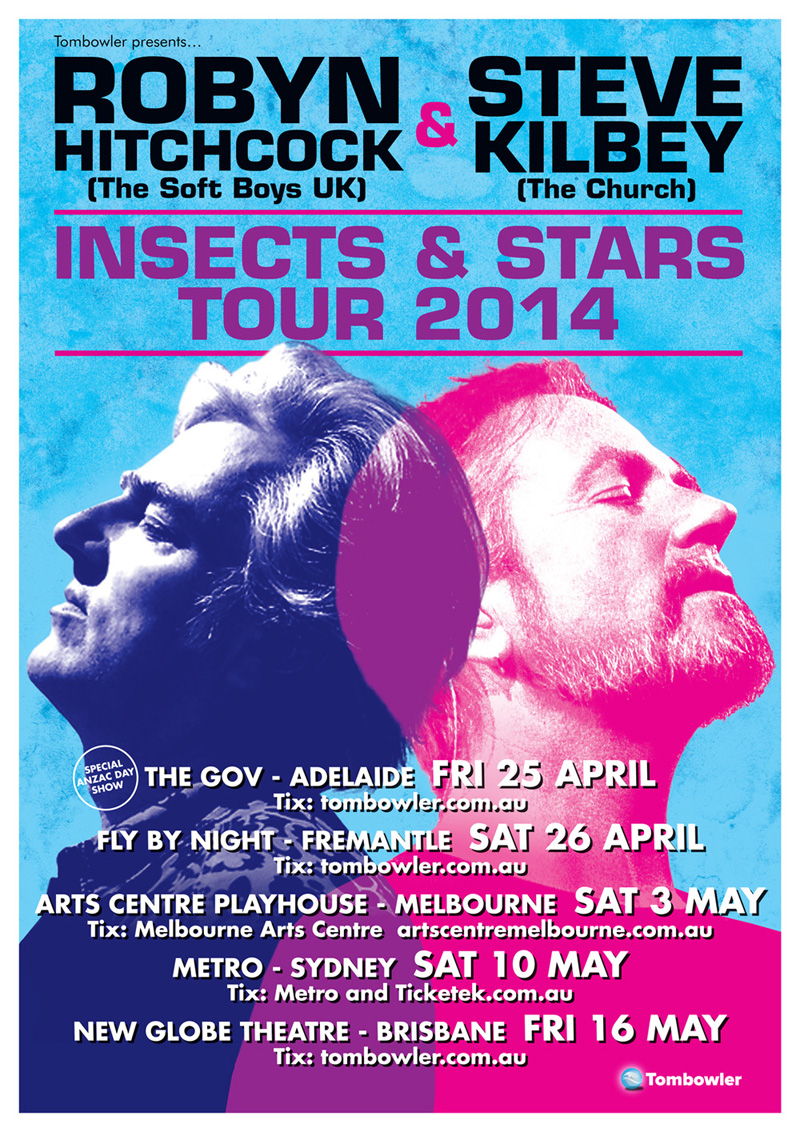 “I thought: pity the poor in spirit who know neither the enchantment nor the beauty of language.” – Muriel Barbery

“A naked lunch is natural to us, we eat reality sandwiches. But allegories are so much lettuce. Don’t hide the madness.” – Allen Ginsberg – ‘On Burroughs’ Work’

Robyn Hitchcock and Steve Kilbey were born in England a year and twenty five miles apart. Both were influenced by the sixties icons (Beatles/ Dylan/ The Archies) and both took great inspiration from the British psychedelic movement. But Robyn and Steve have never met… until now.

Steve Kilbey moved to Australia at the age of 3 and 15 years later formed the best band in the world called the Church (leaving its eponymous competitors sit in the shadows). Robyn Hitchcock stayed in London and formed The Soft Boys, embarking upon a career of musical eccentricity. Between them they have released over a hundred albums. Both have suffered major disappointments in their lives: Steve Kilbey wanted to swallow showbiz itself and Robyn Hitchcock was really only interested in time travel. Upon discovering these things were impossible they gave up on the world and turned inwards to the only realities which made any sense… art and music.

With a thousand or so songs to choose from and armed only with their guitars, Robyn Hitchcock & Steve Kilbey promise an unforgettable evening of whimsical lyricism and psychedelic nursery rhymes.

Come watch time vanish like melting snow on the twin peaks of these mountains of wit and wondrous songcraft.

Melbourne and Sydney music lovers will be spoiled with an additional treat when Dave Mason graces the stage for a very rare performance. ‘Quasimodo’s Dream’ has been recognized as one of the top ten Australian songs of all time by the Australian Performing Rights Association, and the chance to experience Dave showcasing some of his finest work should not be missed.

“A poet is, before anything else, a person who is passionately in love with language.” – W.H. Auden

“A good poem is a contribution to reality. The world is never the same once a good poem has been added to it.” – Dylan Thomas