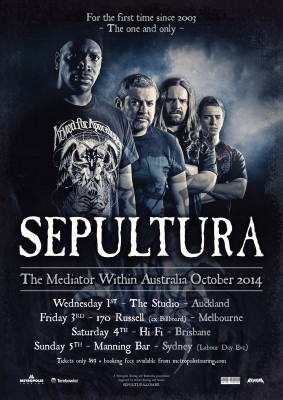 Brazilian death/thrash metal icons, SEPULTURA are making their long awaited return to Australia & New Zealand this October.  The hugely influential outfit hailing from Belo Horizonte, Brazil have not toured Down Under for 11 long years, and the wait is finally over for Australian & New Zealand audiences ready to go bezerk with one of thrash metal’s pioneers.

Since forming in 1983, SEPULTURA have released 13 aggressively rich and furiously powerful studio albums.  Their live set today hosts songs from their extensive career, including some of their finest moments from albums such as ‘Roots’, ‘Chaos A.D.’, ‘Kairos’, ‘Beneath The Remains’, and their brutal new album, ‘The Mediator Between The Head and Hand Must Be The Heart’.

SEPULTURA, which translates to ‘grave’ in Portuguese, formed in 1983 with humble beginnings but their trajectory took them to the top of the worldwide metal music scene.  When SEPULTURA experienced a line-up change in the mid-1990’s, US born Derrick Green was announced as the new front-man of SEPULTURA, and the band haven’t looked back since.

‘Sepultura proved once again that they are in an excellent form nowadays!’ – Metal Rage

Fast forward to 2013 and SEPULTURA have released one of their most deadly and critically acclaimed albums – ‘The Mediator Between The Head And Hands Must Be The Heart’.  Throughout their history of line-up changes and genre alterations, SEPULTURA fans have had their fair share of being kept on their toes, but the band’s longevity has always been cemented by blistering live performances that have remained a constant threat to all of their other contemporaries.

For SEPULTURA and their fans, 2014 is very much a year to remember.  It marks not only three decades of their genre defining career, sitting alongside the best of the best, but it also marks the undisputed leaders of Brazilian metal’s long overdue return to Australian shores.

‘The spirit of Sepultura is very much alive and well!’ – This Is Not A Scene.com

SEPULTURA’s constant progression keeps them far from the grave they were named after.  Celebrating their ‘Roots, Bloody Roots’ by combining tribal cues with thrash, death metal, punk and hardcore elements, there is no doubt that the ever-evolving forward-thinking pioneers like to keep it fresh – from humble thrash and classic rock, to nu-metal grooves and their post-‘Against’ experimental rebirth.

Members of the Australian SEPULTRIBE best be ready for a chaotic show packed with an extensive stretch of classics, including the likes of ‘Refuse/Resist’, ‘Arise’, ‘Territory’, and ‘Attitude’.  With the South American phenomenon well and ready to bring a heavy metal hurricane to their SEPULNATION down under, you will not want to miss what is sure to be a hell of a time!