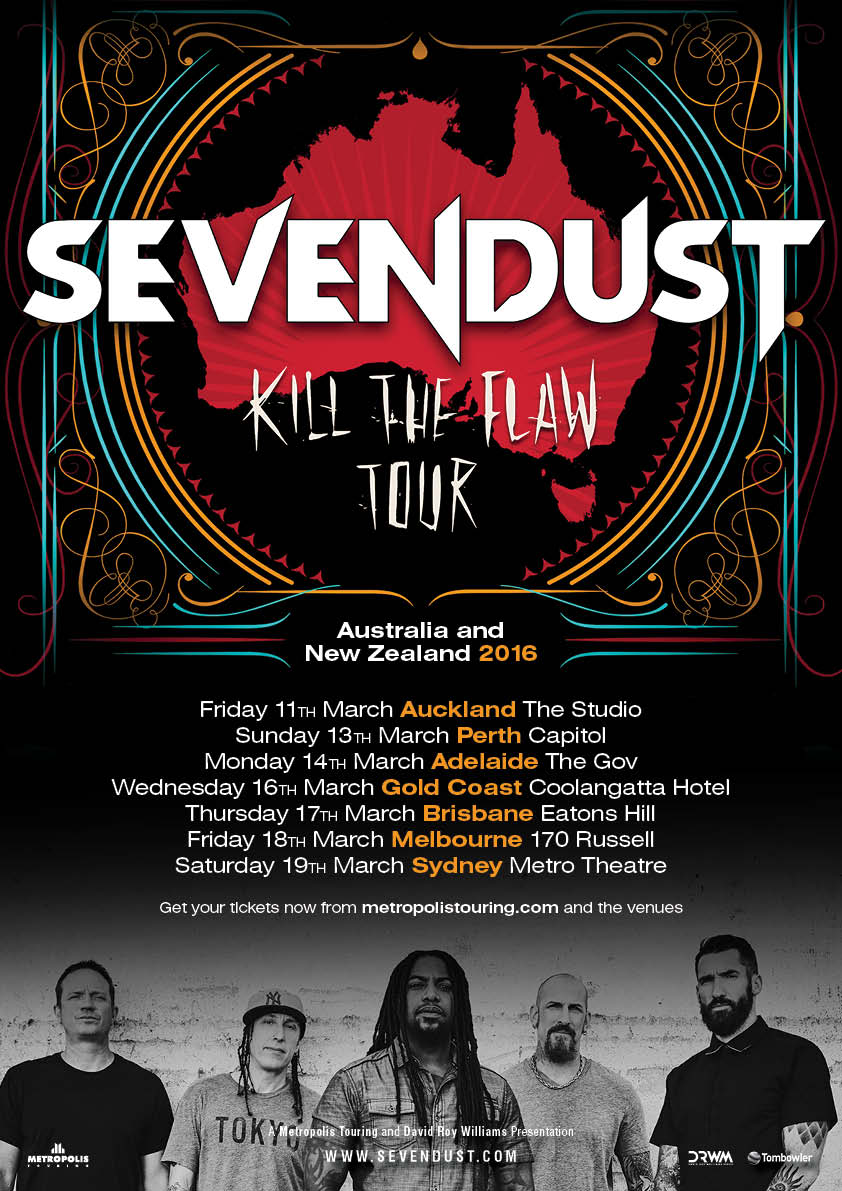 Sevendust’s triumphant return to Australia marks the first shows on Aussie soil in six years and Atlanta’s brutal hard rock kings are back as heavy as ever.

“They blew the audience away! …after about three minutes of their first song, the band managed to rock so damn hard that they shut everything down. It was awesome.” blogcritics.org

Sevendust kicked off their illustrious career with an untouchable string of three gold albums, beginning with their self-titled 1997 debut and continuing with Home in 1999 and Animosity in 2001. Along the way, they’ve sold out shows everywhere and given unforgettable performances at the likes of Rock On The Range, Woodstock and OZZfest.

However, the new chapter starts now. The blistering new album “Kill The Flaw” has received some of the best reviews of the band’s careers, displaying a re-invigouration of creativity and signaling a rejuvenated take-no-prisoners stance akin to that initial 3 album burst of mayhem.

“An uncompromisingly bruising collection of tracks that showcase Sevendust at the top of their game after 19 years on the go. Wow.” Musical Melting Pot

“This album is everything you love about 7D and more… their best work by far!” Full Metal Rock

On stage, the group have never been in finer form – Lajon Witherspoon (vocals), Clint Lowery (lead guitar), John Connolly (guitar), Vince Hornsby (bass), and Morgan Rose (drums) – deliver a massive sound perfectly suited to the absolute turmoil ensuing amongst the maelstrom of exuberant fans in front of the stage.

Clint Lowery puts it best – “It’s the contrast of the melodic vocal over a very percussive, heavy musical landscape. That’s what we’ve always done. That’s one of those things our fan base really connected to. They’re our life’s blood”

“Even with material so angry and aggressive, they were all smiles onstage, interacting with fans, creating or sustaining that connection that has made them such a favorite.” Live-Metal

It’s been a long wait but Australian fans finally get the opportunity to participate in the bedlam this summer when Sevendust hit our shores, starting out in Perth and Adelaide, and culminating in what are sure to be full-on contenders for gigs of the year in Melbourne and Sydney. Limited numbers of VIP tickets will be available, affording the unique opportunity to meet the band and be photographed with them, so be quick and get your tickets now before they are gone!

“The vibe, the energy, the songs, the whole package… Sevendust is the real deal and never disappoints.” Maximum Ink