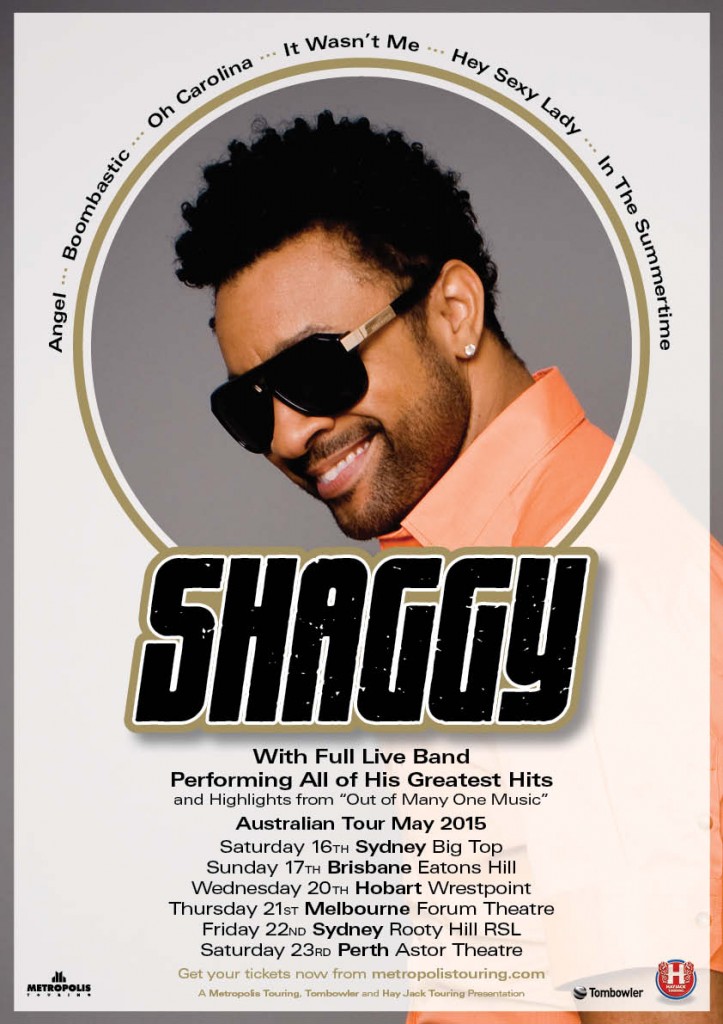 “It’s all in the pelvis. If the spine don’t jerk, nothing else work.”- Shaggy

Metropolis Touring and Tombowler Presents are pleased to announce the Grammy award winning dancehall hip-hop reggae artist Shaggy will make his long awaited return to Australia in May 2015!

Shaggy will perform all of his hits including his three number ones ‘It Wasn’t Me’, ‘Angel’ and ‘Boombastic’ as well as ‘Hey Sexy Lady’, ‘Luv Me, Luv Me’, ‘In The Summertime’ and ‘Oh Carolina’ plus highlights from current album ‘Out Of Many One Music’.

This will be will be Shaggy’s first truly national tour hitting Adelaide, Brisbane, Hobart, Perth, Melbourne and Sydney.

“It’s fair to say the floor of the theatre hasn’t wobbled this much since, well, that earthquake a couple of weeks ago.” – NME

Shaggy first exploded onto the scene back in 1993 with his Top 5 dancehall re-make of the ska hit ‘Oh Carolina’ which was quickly followed up by the party favourite ‘In The Summertime’ (which originally spent six weeks at number one in Australia for The Mixtures in 1970), and a duet with Maxi Priest ‘That Girl’ which again stormed the Australian top ten. The release of the multi-platinum ‘Hotshot’ album saw Shaggy well on the way to worldwide sales of over twenty million albums.

That album spawned the major successes ‘Luv Me, Luv Me’, ‘Angel’ (the Rayvon featured mash-up of Steve Miller’s ‘The Joker’ and ‘Angel Of The Morning’ by Juice Newton) and of course the all-time classic ‘It Wasn’t Me’ which recently saw The Daily Show’s Jon Stewart describe Vladimir Putin’s denial of Russian Ukraine expeditions as ‘The Shaggy Defence’.

“He looked like he was having the time of his life, Every smile, every wave of his hand, every sway of his hips shouted ‘star.’” – VH1

The man Time Out described as a “pop-dancehall hit-factory” has fans partying all around the world with the current live tour.  His unique, stylised voice, reggae and dancehall influences and sexy dancers had even the cynical NME.Com praising him for both the plethora of hits and the rugged sex appeal he brought to London’s Wembley Arena.

“I enjoy touring and I spend most of my time doing that. I like getting in front of an audience and having that personal & intimate connection with fans. It’s really the touring aspect that we [my team and I] focus on a lot.” – Shaggy

Don’t miss Shaggy turn Australia boombastic with his Greatest Hits Tour. Get your tickets now from Metropolis Touring and Tombowler.

“A high energy roller coaster ride cycling through Shaggy’s greatest hits In The Summertime, It Wasn’t Me, Angel, and ended with everybody jumping up and down on the spot in a frenzie.” In The Mix