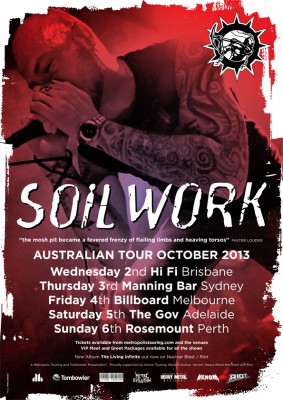 “Soilwork assaulted the crowds with their merciless metallic wall of noise, wringing every last ounce of energy out of the black-shirted masses” (the AU review)

Swedish metallers SOILWORK have been regarded by many as pioneers in the genre of melodic death metal. Alongside fellow Swedish acts such as In Flames and Dark Tranquility, the band’s unique blend of melodic metal is a fusion of the classic Gothenburg metal sound with power-groove riffs that were prominent in 70’s and 80’s British and European metal.

Since renaming themselves in 1996, SOILWORK really have been ‘working from the ground up’ developing their sound, adopting more singing and soaring melodies in their most recent release ‘The Living Infinite’ as well as re-visiting the faster rhythm sections and intricate guitar work that became their signature sound.

Playing to sold-out crowds on their last Australian visit in 2010, the band delivered a monster live show, proving themselves a world-class act. Returning to our shores, the metal powerhouse that is SOILWORK are sure to bring a skull-crushing, heart-pumping show even bigger than the last.