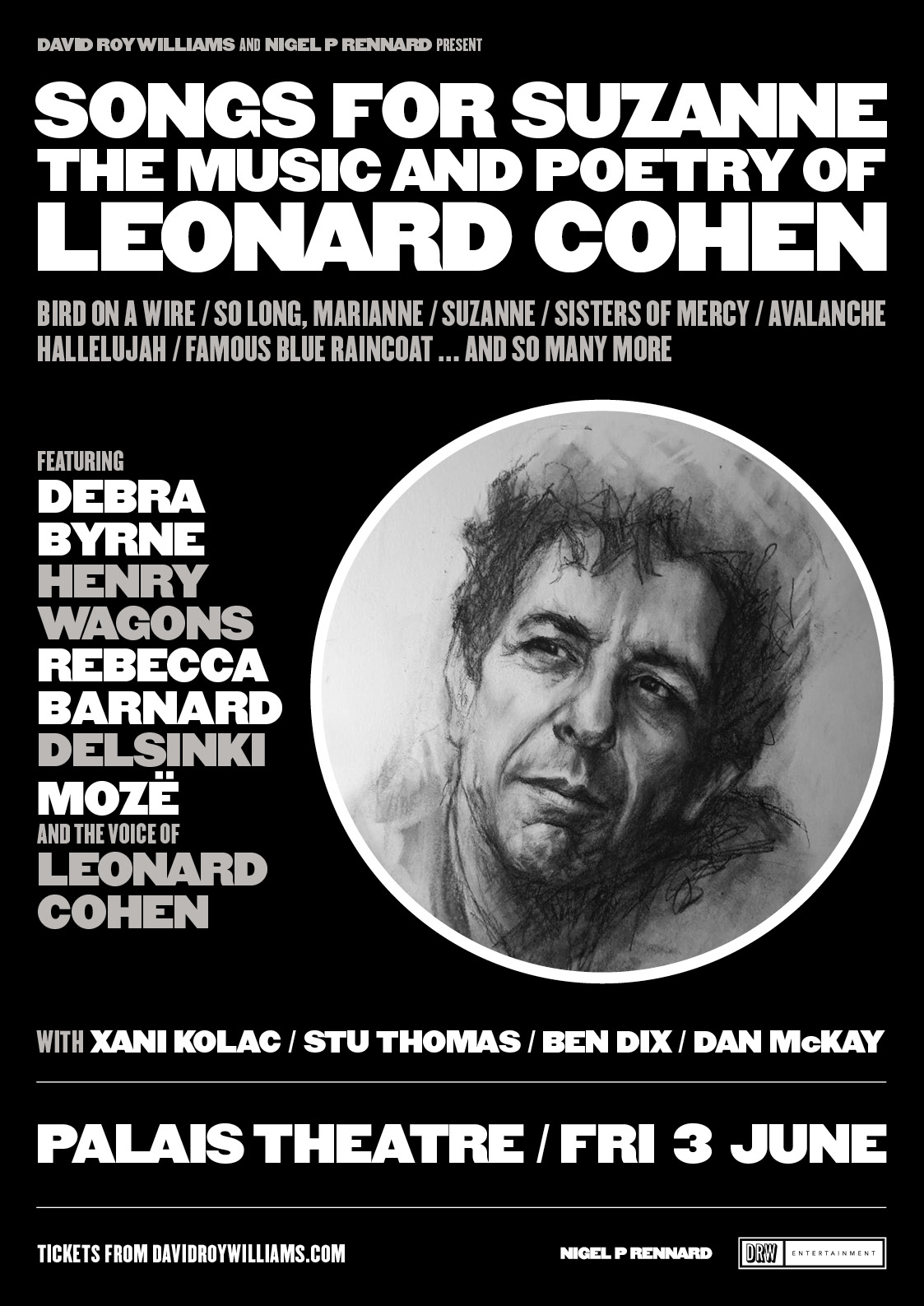 SONGS FOR SUZANNE: THE MUSIC AND POETRY OF LEONARD COHEN

The fascinatingly enigmatic Leonard Cohen’s first clutch of classic albums saw him become one of the leading proponents of folk. Signed following a Newport Folk festival appearance, Cohen’s early albums were acclaimed by critics and ecstatically received by a community who within two years witnessed him provide a highlight performance at 1970’s Isle Of Wight festival, and receive outstanding covers of his songs by folk giants such as Judy Collins and Joan Baez.

Songs for Suzanne will be a celebration of the beginnings of a distinguished career of a brilliant singer-songwriter. Alongside standards including “Bird On A Wire”, “So Long, Marianne”, “Avalanche”, “Hallelujah”, and “Famous Blue Raincoat”, will feature many songs never performed by the man himself on his Australian tours. Leonard Cohen’s initial success came as an author, with two novels and four collections of poetry preceding his debut album. Cohen’s own readings of some of these works, which saw him compared to James Joyce, will be incorporated into the show.

Cohen’s songs will be presented faithfully in the way they were originally recorded. Musical accompaniment for the singers will consist of mesmerising finger-plucked guitar strings provided by Ben Dix and Dan McKay, the haunting violin of Xani Kolac, and Bass guitar and keyboards from illustrious musicologist Stu Thomas.

Audiences will be spellbound by classic Cohen favourites from his most notable albums such as Songs of Leonard Cohen, Songs from a Room, Songs of Love and Hate, and New Skin for the Old Ceremony. Known for his haunting acoustic melodies and deep, raw vocals, Cohen was a true folk singer and poet who adapted his songs and style as time went on, never losing sight of the current music trends and modifying his sound through the decades.

There will be one show only, so please do join us for this amazing journey through the music and poetry of Leonard Cohen.

Debra is an original cast member of Young Talent Time and has performed in a variety of musical theatre productions, including Cats, Jerry’s Girls, Sunset Boulevard and Les Miserables. An Australian music icon, she has been in the industry since she was 14, and was only 16 when she won a Logie and was named Queen of Pop. She has released three solo albums, an autobiography and has appeared in numerous Australian television productions, including Fat Tony and Co.

Henry has released numerous albums, including Upstairs at United Vol. 9. (performing Elvis Presley and Waylon Jennings covers), which was recorded above the United Records in Nashville.

Henry recently starred as Warren Zevon in Accidently Like a Martyr with a new season of that show coming in 2022.

Wagons is the host of Tower Of Song, a national Americana/roots radio show, broadcast weekly on ABC radio.

Xani is a violinist, songwriter and composer. Her work as a Musical Director includes being the founding member of Melbourne’s SPIRE Ensemble, co-founder of Melbourne Amplified Strings (MAS), and working in theatre on productions such as Xenides (Black Swan State Theatre) and Cyrano (Melbourne Theatre Company).

Xani has performed with artists as diverse as Kate Miller-Heidke, Jen Cloher, Tex Perkins, Harry Angus (The Cat Empire), Steve Kilbey, Tim Rogers, Jens Lekman, Kate Ceberano, My Friend The Chocolate Cake and Clare Bowditch. She was also the violinist in the Melbourne and Brisbane seasons of Tony award-winning musical “Come From Away”.

Acclaimed Swedish artist Jens Lekman has this to say about Kolac  “Of all the countless violinists I’ve played with over the years, Xani stands out as one of the greatest.

Rebecca Barnard has been performing for over 30 years. She formed her band Rebeccas’s Empire in the 90’s. The band was much loved and had songs on the Triple J Hottest 100 for 3 years running. She has been a regular guest on TV shows Spicks n Specks and Rockwiz and appears often on ABC radio as co-host to various presenters. She conducts mentoring/ songwriting workshops for young women and has appeared on dozens of other artists’ albums usually recorded at YIKESVILLE, the studio she built with Shane O’Mara. She has released 3 solo albums and is working on her 4th now.

STU THOMAS is a multi-instrumentalist and visual artist, and fronts the hot-wired voodoo-surf-noir group The Stu Thomas Paradox.

Also bass player to the stars, Stu is a long-time member of Kim Salmon & The Surrealists, Dave Graney & The MistLY, and has worked with many, many other artists including Mick Harvey and Billy Miller. Stu has played in 20 countries and appeared on over 80 releases.

He has a good sense of humour, likes movies, conversation and walks on the beach. No, really.

Shape-shifting, singer, songwriter, musician, Delsinki cannot be defined by one type, time or genre. This Tasmanian born, but now Melbourne based artist will release his second album CITY/COUNTRY, following on from his debut album “And there was found, No place for them” produced again by the enormous talent of Cameron McKenzie. DELSINKI conducted a similar exercise with ‘Keep The Circle Unbroken’ which he put together in March 2021, its the message of unity holding strong in a world that remains largely divided.

MOZË is a soulful genre-blending singer-songwriter; fusing her neo-soul roots with potent pop sensibilities and a powerful voice. Mozë has seen been attracting attention from all across the Melbourne underground scene, pushing her into our musical consciousness.