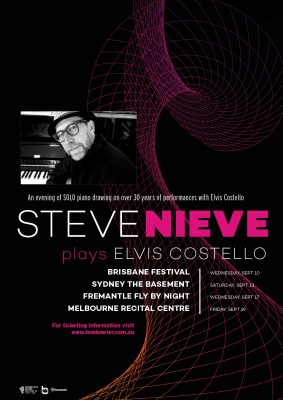 Steve Nieve has been playing keyboards for Elvis Costello for more than thirty years, firstly as a member of The Attractions, and in more recent times with The Imposters. Steve also has worked on Costello’s solo albums and alongside Elvis and Burt Bacharach as part of the Painted From Memory album and tour.

Perhaps the most intimate performances, however, were those where Elvis and Steve toured together creating a spellbinding tour-de-force of piano, guitar and voice. Anybody who has witnessed these or indeed any of Elvis Costello’s live shows will appreciate the special magic that occurs when Steve Nieve is let loose to solo on the piano.

Now, finally, Australia will get to experience a full evening of this magic as Steve and his piano take centre stage.

Steve Nieve was inducted into the Rock and Roll Hall of Fame in 2003 as a member of Elvis Costello and the Attractions.