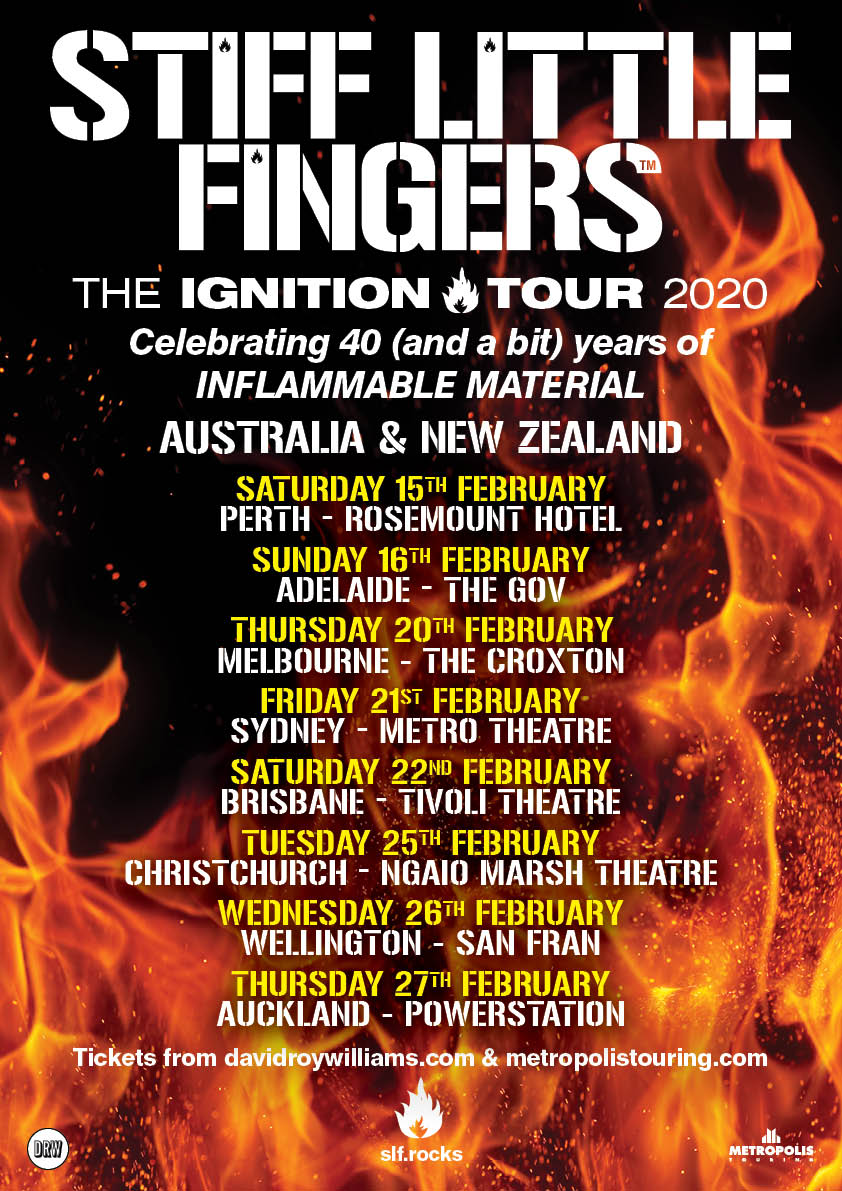 With Sold Out shows on their last Australian & New Zealand Tour, SLF return in February to celebrate the 40th Anniversary of their seminal debut album – Inflammable Material!

“They still dish out those timeless classics with a fire and brimstone that makes “Alternative Ulster”, “Barbed Wire Love” and “Suspect Device” send a surge of adrenaline around the room.” Louder Than War

On Feb 2nd1979, STIFF LITTLE FINGERS unleashed their groundbreaking debut album upon a confused musical world barely ready for the incendiary onslaught of passion and politics that positioned SLF right at the forefront of the punk movement.

One of the most significant UK punk-rock albums ever, Inflammable Material captured the full onslaught of anger and frustration in the UK at end of the 70s. Formed in Belfast, Northern Ireland, STIFF LITTLE FINGERS wrote about their own lives growing up at the height of The Troubles. Full of lyrics melding the personal and political, SLF’s music combines punk energy with infectious hooks, and a delivery that rings of honesty and commitment.
“Alternative Ulster” decries the Irish political sides in the Northern Ireland controversy — the Royal Ulster Constabulary and the Irish Republican Army — holding them both accountable for bloodshed and social and economic stasis furthering nothing but their own interests. “Suspect Device” which opens the set, screams at the heart of the conflict, that neither side can be believed as both reduce freedom to a buzzword while wielding guns. Both tracks are calls to arms, but of a different sort — the arms of dialogue and intelligence in the midst of idiocy and murder. Punk rock never sounded so brutal or positive in one band. Allmusic

STIFF LITTLE FINGERS continue to pound audiences with songs that incite ferocity and demand answers. Bad Religion and Rancid have both credited SLF as a major influence and the band are more in demand than ever. As well as Inflammable Material classics “Suspect Device”, “Wasted Life”, “Alternative Ulster”, “Johnny Was” and “State Of Emergency”, fans can anticipate anthemic favourites such as “Gotta Gettaway”, “Tin Soldiers”, “At The Edge” and “Nobodys Hero”.
“The lads banged out classics track after track…an arsenal of tracks from over four decades bombarded the Belfast crowd who were in fine voice and reciprocated in kind.” Rock n Load

“How lucky we are to still have them after 40 years. The whole area in front of the stage was filled with smiling, dancing, sweating fans having the absolute best time. There are few live acts that deliver more than Belfast’s finest. A brilliant night is guaranteed.” Outline online

“We don’t play a lot of love songs” Jake Burns