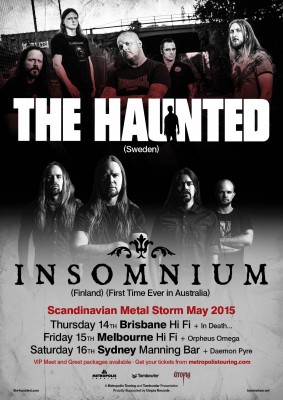 “they savagely ripped a hole in the mid-morning crowd.” – Bonehand

“…punishing the crowd with their punkier brand of death metal.” – Bonehand

“The Haunted are very hard to beat, both as a live act and on record and with the amount of touring they have, it is a pleasure to see them live.” – Metal Rules

“The Haunted had everything you look for in a live band: tons of stage presence, tight musicianship, memorable songs, and bloody loud instruments.” – Skiddle

“The fans all exploded in a collective sweaty but happy circle pit and they squeezed the last minutes of the show together with the band.” – Metal Rules

“When their hour is up, the whole crowd seem to be converted, and are all chanting their name as they leave the stage.” – Gig Junkies

“The raw viscera of the band’s hardcore aesthetic converts to live electricity extremely well, and this latest performance maintained the ferocity.” – Exclaim CA

“The twin-guitar melodies are really something to behold, adding an almost infectious quality to the bludgeoning heaviness and rapid fire drums.” – The Digital Fix

“Insomnium are an incredibly tight band live with not a single note or beat sounding out of place on any of the tracks with with vocals sounding particularly impressive.” – Rock Sins

“Insomnium take to the stage like a slow moving hurricane, their kaleidoscopic sound a dense wall that sounds utterly immense the intricate melodies still intact seemingly in spite of the vicious barrage of double kick drums and searing guitar work. “ – Sonic Abuse

“This is a band that puts on a ridiculously tight show and the way they move together as one unit truly is something to behold.” – Soundscape Magazine

“It really did feel like Insomnium could do no wrong because the crowd responded well to whatever they did, and their enthusiasm fed into the band’s performance.” – Soundscape Magazine

There has been an influx of great tours coming to Australia in the last few years, but there has rarely been a bill featuring some of Melodic Death Metal’s finest on a double bill package.

Well, patience has been greatly rewarded as 2 of the best in the genre – Sweden’s THE HAUNTED and Finland’s INSOMNIUM are teaming up for 3 very special shows in May!

When it comes to Melodic Death Metal for many, Sweden’s THE HAUNTED considered one of the benchmarks of the genre with a highly successful career spanning close to 20 years playing in front of millions all over the world.

After the touring cycle for Unseen, things looked a bit dire in 2012 where they lost 3 members, but Guitarist Jensen & Bassist Jonas Bjorler have carried on by re-welcoming some old friends in Vocalist Marco Aro & DrummerAdrian Erlandsson and bringing guitar maestroOla Englund in to create a new chapter in THE HAUNTED’s story.

This regrouping lit a fire with creative juices flowing that emanated in 2014’s Exit Wounds, a blistering aural attack from beginning to end.

THE HAUNTED’s live show demolishes all in it’s path like a rabid bulldozer and shows all whyTHE HAUNTED remain at the top of the heap delivering tracks such as Eye Of The Storm,D.O.A, Bury Your Dead, 99, Hatesong,Trespass, Cutting Teeth, Hollow Ground, All Against All, Trend Killer that show up all those new bands who the big dogs of Melodic Death Metal truly are.

Slowly but surely, Finland’s INSOMNIUM have made themselves a household name among the melodic death metal legions and have redefined and reset the boundaries of the genre and evolved constantly throughout their 18 year career and they are finally making their very first (and highly awaited) visit to Australian shores!

Their sound can be described as a marriage of Scandinavian death metal and traditional Finnish tunes, emanating in catchy but progressive, melodic yet brutal compositions such as Where The Last Wave Broke, As We Sleep, Mortal Share, Last Statement, Only One Who Waits, The River, Drawn To Black,Unsung, Revelation and The Day It All Came Down among many others.

Noted by many as having an undeniable live presence where they deliver 110% every night, their material flawlessly translates to the live setting where the band transcend the studio versions with vicious energy while retaining all of their melodic hooks and atmosphere.

With THE HAUNTED triumphantly returning and INSOMNIUM making their debut, this Melodic Death infused double bill is going to be one for the ages and those who witness it will be left with sore necks and jaws dropped in pure amazement…