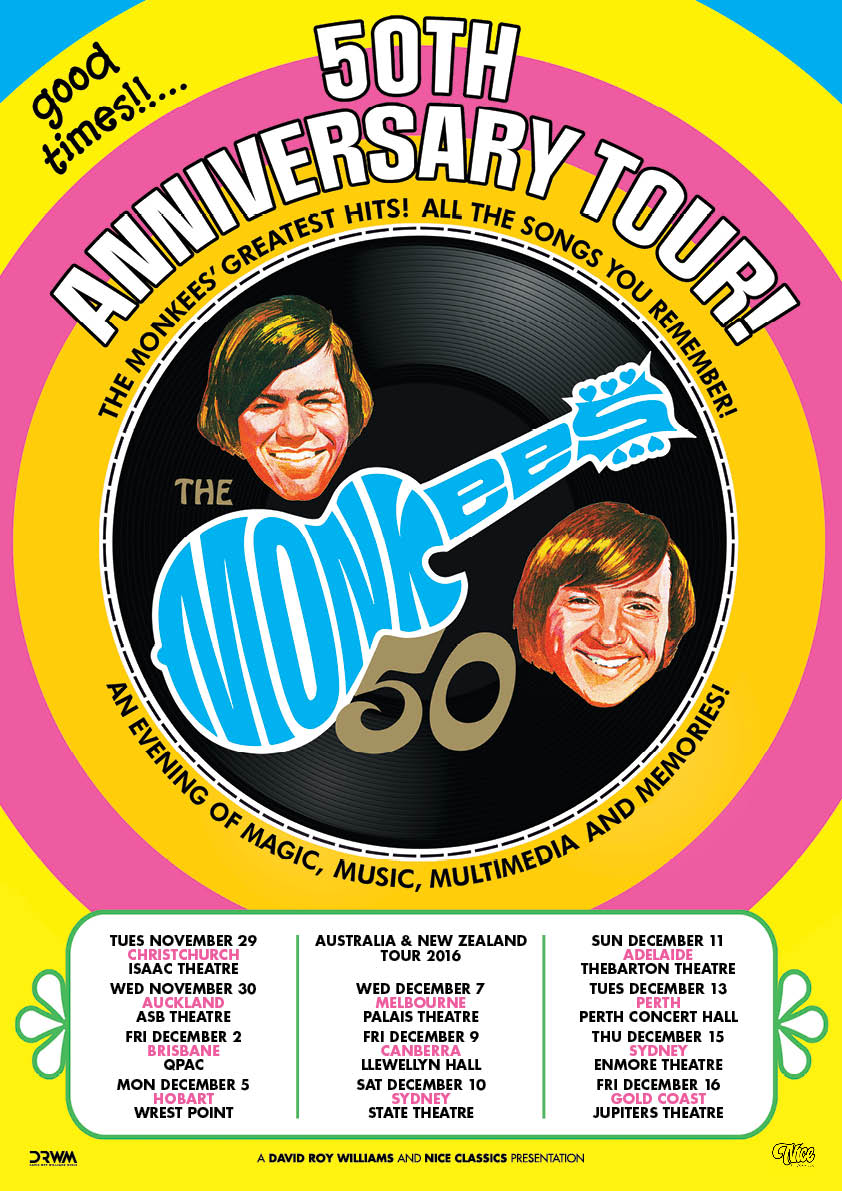 The Monkees’ Greatest Hits! All the songs you remember!

On September 8, 1965, when producers Bob Rafelson and Bert Schneider placed a classified ad in The Hollywood Reporter seeking “4 insane boys,” they had no idea that they were about to unleash Monkee-mania! But that’s exactly what happened the following year when the first episode of “The Monkees” debuted on NBC on September 12, 1966.

50 years later and The Monkees anniversary show is coming to Australia and New Zealand. After sell-out North American shows, and with a brand new album “Good Times!” in the charts, Micky and Peter are bringing the Monkees magic downunder.

The Monkees 50th Anniversary show is a unique concert experience. Times may change but infectious pop hits and wonderfully charismatic characters stay in our hearts and memories forever.

When four young men were cast in the television roles of a struggling rock band inspired by The Beatles’ A Hard Day’s Night, few could have predicted the impact The Monkees would make on music and pop culture at large, an impact that still reverberates 50 years later.

Assembled in Los Angeles in 1965 by Bob Rafelson and Bert Schneider for the television series The Monkees, the quartet of Micky Dolenz, Michael Nesmith, Peter Tork, and the late Davy Jones brought a singular mix of pop, rock, psychedelica, Broadway, and country to their music. The show itself, meanwhile, paid tribute not only to The Beatles, but also to the comedy stylings of The Marx Brothers and Laurel and Hardy as well as the pop-art sensibilities of Warhol and the emerging San Francisco psychedelic scene.

The Monkees’ first single, “Last Train to Clarksville,” was released in August 1966, hitting #1 and serving as advance publicity for their series, which debuted on September 12. When the group’s self-titled debut album arrived in stores a month later, it quickly headed for the top spot of the Billboard charts, where it would ultimately sit for 13 of the 78 weeks it remained in the Top 200. (Two decades later, in the midst of a new burst of Monkee-mania, The Monkees popped back onto the charts, bringing the total number of weeks to 102.)

By the time the group’s TV series aired its final new episode on March 25, 1968, the Monkees had seen three further albums top the charts – More of the Monkees, Headquarters, and Pisces, Aquarius, Capricorn & Jones, Ltd., all of which were released in 1967, staggeringly enough – while racking up several more hit singles, with “I’m a Believer,” “(I’m Not Your) Steppin’ Stone,” “A Little Bit Me, A Little Bit You,” “The Girl I Knew Somewhere,” “Pleasant Valley Sunday,” “Words,” “Daydream Believer,” “Valleri,” and “Tapioca Tundra” all finding their way into the Billboard Top 40.

After the series’ two-season run, the group went on to star in the cult feature film HEAD (co-written by Jack Nicholson) and a TV special (33 1/3 Revolutions per Monkee) while also continuing to record new material, but much as the ‘60s gave way to the ‘70s, the members of the Monkees eventually gave in to their individual musical interests and went their separate ways… for awhile.

In February 1986, after MTV broadcast a marathon of The Monkees, Dolenz, Jones, and Tork reunited for a 20th anniversary tour, with Nesmith joining them onstage for the Los Angeles date of the tour, and in 1996, all four members of the group reunited for a new album (Justus) and TV special (Hey, Hey, It’s the Monkees).

In the wake of Jones’s death on February 29, 2012, the surviving members of the Monkees reunited and performed a series concerts. The shows were greeted with sell-out response and phenomenal reviews. Now, Micky Dolenz and Peter Tork carry on that tradition with a full evening of magic music and multi-media splendor, including clips from their Emmy Award winning series. Their new show features all of the Monkees hits, plus an intimate acoustic set and solo spots for each of the singers. This Evening With The Monkees is sure to please every fan of the band.

Meet Micky Dolenz and Peter Tork
Photo with Micky & Peter on your own camera or phone
Limited edition A3 Thick Card Poster signed by Micky and Peter
Admission to Soundcheck featuring fan faves and deep cuts not included in the normal set.
Monkees guitar pick
Official commemorative Monkees VIP Laminate
STRICTLY LIMITED TO 30 ONLY PER SHOW