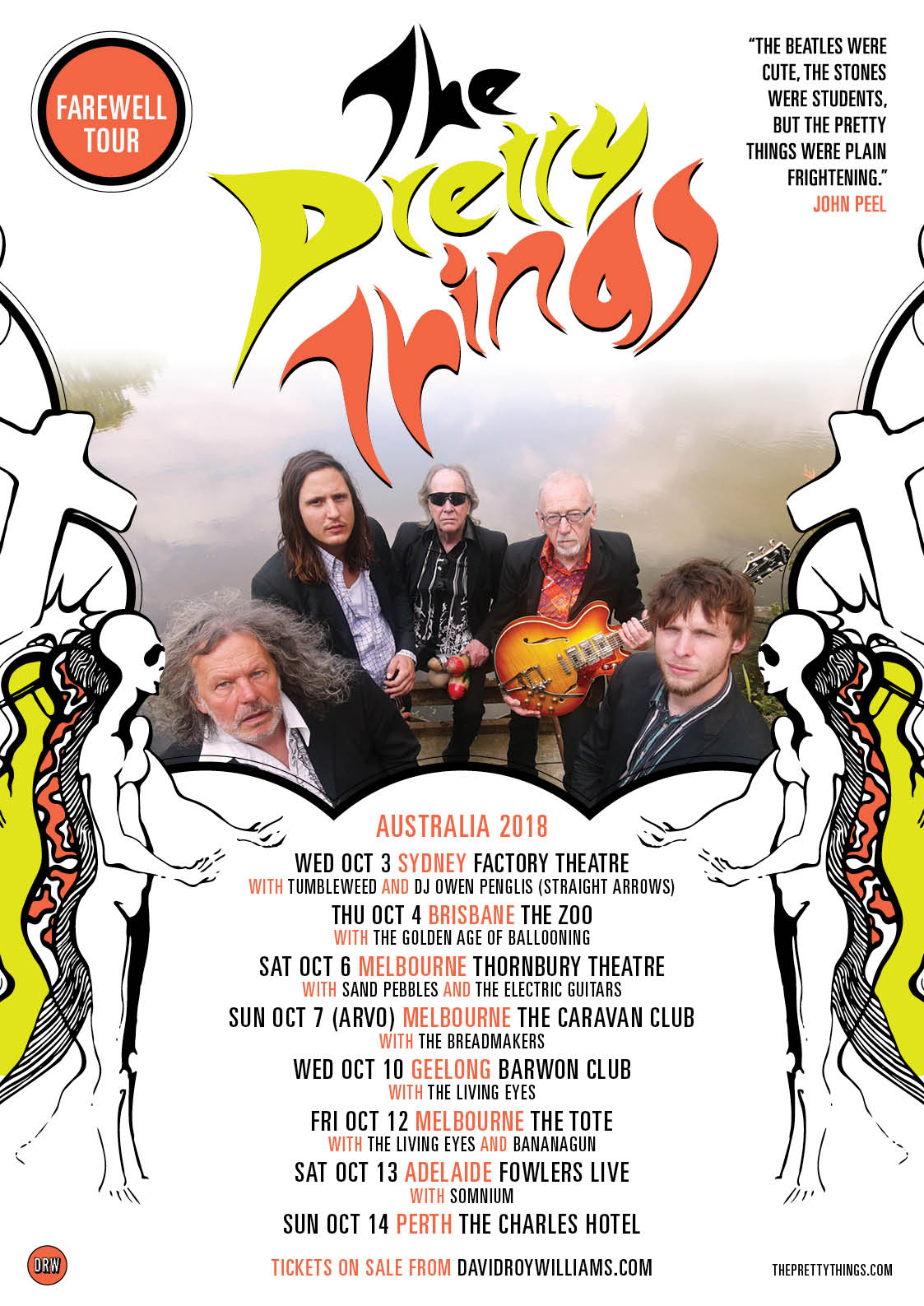 After 55 years of live performing, The Pretty Things – the iconic, 1st wave R&B / psychedelic cult heroes, formed by Ex-Rolling Stone Dick Taylor and singer Phil May – will retire from electric performances at the end of this year when they play one final show in London on December 18 with special friends including Van Morrison and Pink Floyd’s Dave Gilmour.

Unbelievably, Australia has lucked out and will be witness to some of the band’s final performances. And it may have taken them half a century, but The Pretty Things will be performing for the first time ever to Brisbane, Adelaide, Geelong and Perth audiences. Of course, Sydney gets a show (supported by Pretty Things fans Tumbleweed), and there’s three Melbourne shows including a one-off performance of their landmark Abbey Rd. psych classic, S. F. Sorrow.

It cannot be overstated the enormity of the impact The Pretty Things had on the UK music scene when they burst upon it with the dirty garage 1, 2 punch of Rosalyn and Don’t Bring Me Down. Prettier than the Stones and grittier than The Who, the band racked up a huge history of musical and cultural “firsts” – the “longest hair in the world”, first ever rock and roll drugs bust, most arrests of any band, first ever rock-opera, arrested for discharging a sawn-off shotgun, first U.K. band to win Rolling Stone Record of the Year – The Pretty Things are an indelible part of the fabric of popular music and the social influence that it has created.

With such outstanding classics as L.S.D., Midnight to Six Man and one of the wildest psychedelic singles ever released in Defecting Grey, The Pretty Things proved a huge influence on artists as diverse as David Bowie (who as a teen followed the band around religiously and later covered two of the band’s singles), The Ramones, The Sex Pistols, Radio Birdman, Aerosmith, The White Stripes, The Saints, Iggy Pop, Kasabian, Hoodoo Gurus,  and many, many more – all of whom cite their outrageous behaviour, incandescent stage performances and astonishing catalogue of remarkable, ground-breaking recordings as fundamental in the creation of their own work. The influence of the band’s pioneering psychedelic work can be clearly heard in the work of contemporary groups like King Gizzard & The Lizard Wizard and Thee Oh Sees.

It should be compulsory for anyone with the slightest interest in popular music and the youth and social revolution of the 1960’s to see The Pretty Things before they hang up their guns at the end of this year.

The Pretty Things are waving goodbye. Be there to wave back…….

Some other things we could mention about The Pretty Things:

Dick Taylor left The Rolling Stones to form the band with Phil May.

S.F. Sorrow was recorded at Abbey Rd. at the same time as Sgt Pepper’s and Pink Floyd’s Piper At The Gates Of Dawn with production by Norman Smith.

The band’s 1970 Parachute album was awarded Rolling Stone Magazine’s first ever Album of the Year.

The Pretty Things were the first signing to Led Zeppelin’s label Swan Song and their Silk Torpedo album predates Zep’s first release on their own label, Physical Graffiti.

The Pretty Things were the first ever band to take their original labels to court and win back their recording rights.

The band were banned from New Zealand after setting fire to a bag containing a rotting crayfish, onboard a flight (as you do).

Original bass guitarist John Stax managed to escape with his sanity intact by running off to live in… Australia.

The band was offered Mr Tamborine Man before The Byrds got hold of it – they told their manager to fuck off.

Dave Gilmour sites Parachute as an influence on Dark Side Of The Moon.

In 2009 The Pretty Things won the first ever Mojo “Hero” award.

“One of the greatest R&B bands of all time – real wild.” Van Morrison

“The Beatles” were cute, “The Stones” were students, but “The Pretty Things” were plain frightening.” John Peel 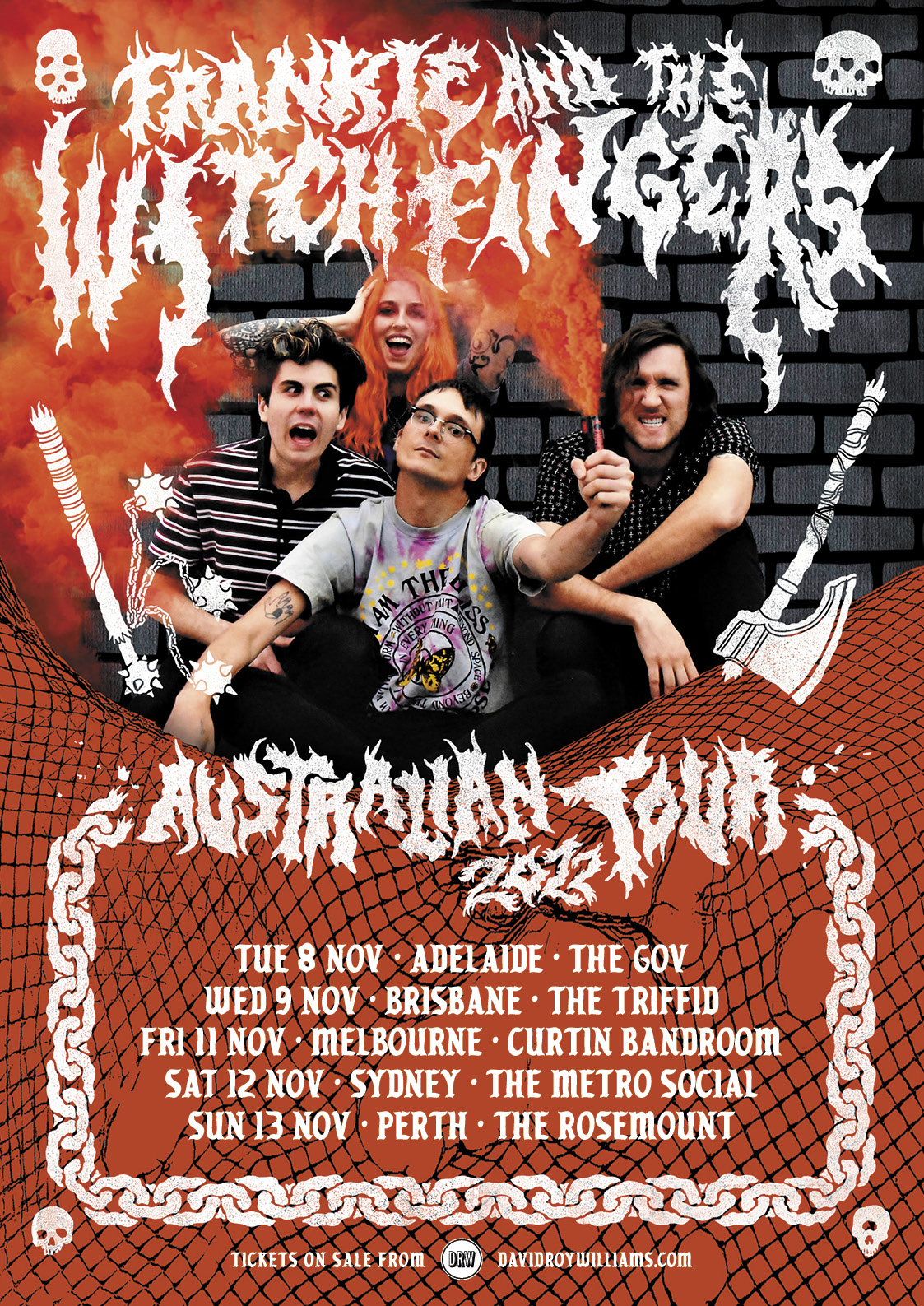