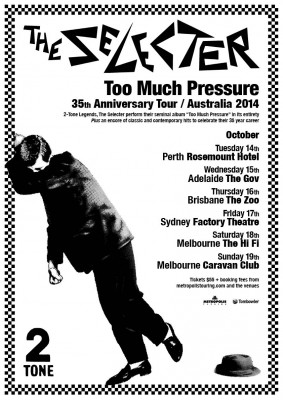 Calling all Rude boys and girls!

2-Tone Legends The Selecter will return to Australia this October on their Too Much Pressure 35th Anniversary Tour!

One of the most vital, visceral and important ska / 2-Tone acts ever, The Selecter are fronted by the female icon of the 2-Tone era, Pauline Black (cited as a prime influence by No Doubt’s Gwen Stefani) and Arthur ‘Gaps’ Hendrickson. Mixing punk, ska and reggae, The Selecter reflected the social and political issues of the early Thatcher years in Britain and gave a voice to disaffected youth across the racial divide that still rings true today.

The Selecter burst onto the ska scene in March 1979 with the self titled song on the flip-side of The Specials ‘Gangsters’ (the debut release on 2-Tone Records). They followed that in October with their own single, the skankin’classic ‘On My Radio’. And in February 1980 they released their classic debut album “Too Much Pressure” which spawned the timeless – ‘Three Minute Hero’, ‘Missing Words’ and of course ‘Too Much Pressure’. It will be played IN FULL along with a special encore of all your favourites from their extensive back catalogue!

Pauline Black “We thought our 35th anniversary would be the perfect time to revisit our very first album, Too Much Pressure and perform it in full…for the very first time! We can’t wait to get on the road to bring our message of multiculturalism from across 4 decades to venues up and down the land. See you there!”

After hitting Australian shores in 2012 for the first time ever, the band have jumped at the chance to return to a country filled with 2-Tone lovers. They will kick things off with three shows in New Zealand, where they are venturing for the first time before playing every capital city in Oz. As anyone who came along last time knows this isn’t a band simply going through the motions – they still put every bit of energy they have into their shows and deliver the ska goodness!

“The pit and circle of sweaty dancers threatened to spin out of control.” Coachella Review

“A joyous rude-boy revue from an act as slick and brash as their shiny silver suits.” GQ Magazine