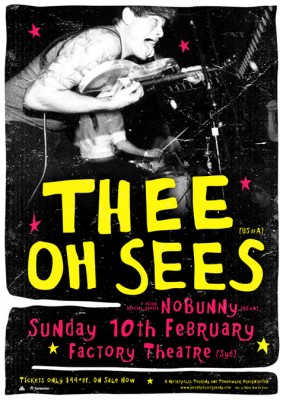 When California’s prolific Thee Oh Sees announced they would be swinging by Australia for the All Tomorrow’s Parties festival and a run of headline shows in February fans were left pondering, where’s the Sydney date?

Well, we’re very pleased to announce we have locked in Thee Oh Sees for a special ATP Sydney sideshow onSunday 10th February at the Factory Theatre.  If you missed out on seeing them in January 2012 when they Sold Out the Annandale Hotel don’t make the same mistake this time. They have a rep for insane, unrestrained, cacophonous live shows and possibly the most fun moshpits to be in –  “they make you wanna move your body, jump, scream, sing, laugh, cry, feel”

Oh and did we mention the support is their Californian neighbour NOBUNNY! Giddy up!

“See this band before you die. Die while seeing this band.”

“this band is absolutely insane”

“the house band for a runaway train.” (Pitchfork on Thee Oh Sees)

“the illegitimate offspring of the Archies, Joey Ramone, Hasil Adkins and Kim Fowley”