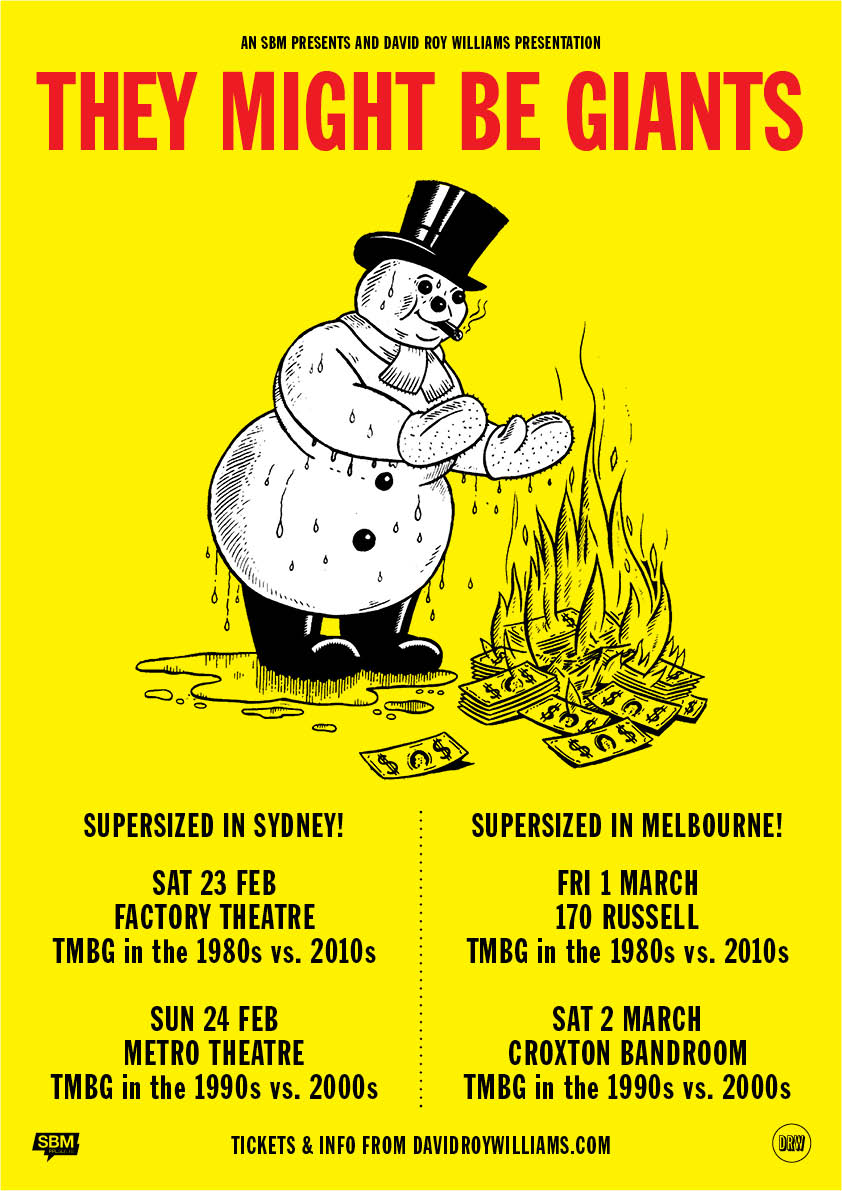 AN EVENING WITH THEY MIGHT BE GIANTS  – SUPERSIZED SHOWS IN SYDNEY AND MELBOURNE!

TMBG’s brand new show features two big sets including all-time favourites, along with an ever-shifting rotation of fresh rarities spanning their epic career, and spur-of-the-moment improvisations that will delight even their exhausted road crew. The band recently wrapped up a thrilling run of European dates where they played to ecstatic sold-out crowds, and now they’re bringing their unique sensibility to stages across Australia.

Sydney and Melbourne fans are in for double-headers, with the band promising two unique nights of music—one pitting their 80s output against the 2010s, and the second their 90s efforts vs. the 00s.

Recently, They Might Be Giants released a new Dial-A-Song video “The Communists Have the Music,” createdwith the animation team lead by David Plunkert, the award-winning illustrator of the notorious The New Yorker Trump/KKK sailboat cover. The track is an instant TMBG classic with the melodic hooks the band is renowned for. Listen to it twice and the song will play on in your head for days.

John Linnell shares, “On the one hand, Fran Lebowitz memorably said of Communism vs. Fascism that one was too dull and the other too exciting. However, our song takes its cue from somebody (I can’t remember who) in our high school, who once compared two bands (I wish I could remember which bands) by declaring that one had the power but the other had the tunes. This enduring metaphor seems to apply to any pair of things we can think of.”

The track is available at Spotify and all streaming serviceds now and will be released as a 7″ single, backed with “I’ve Been Seeing Things”.

This year alone the band released their 20th full-length album I Like Funto rave reviews, played 50 US cities demolishing stages to mostly sold out rooms, was nominated for a Tony award for their song “I’m Not A Loser”, posted 20+ additional songs on their Dial-A-Song service, was the featured guest on WTF with Marc Maron, and performed on CONAN(+special web-exclusive)!

“Catch them if you can. Their live shows always deliver.”

“Perfect pop music can come from anywhere and can go anywhere. They Might Be Giants have demonstrated this for a quarter century.”