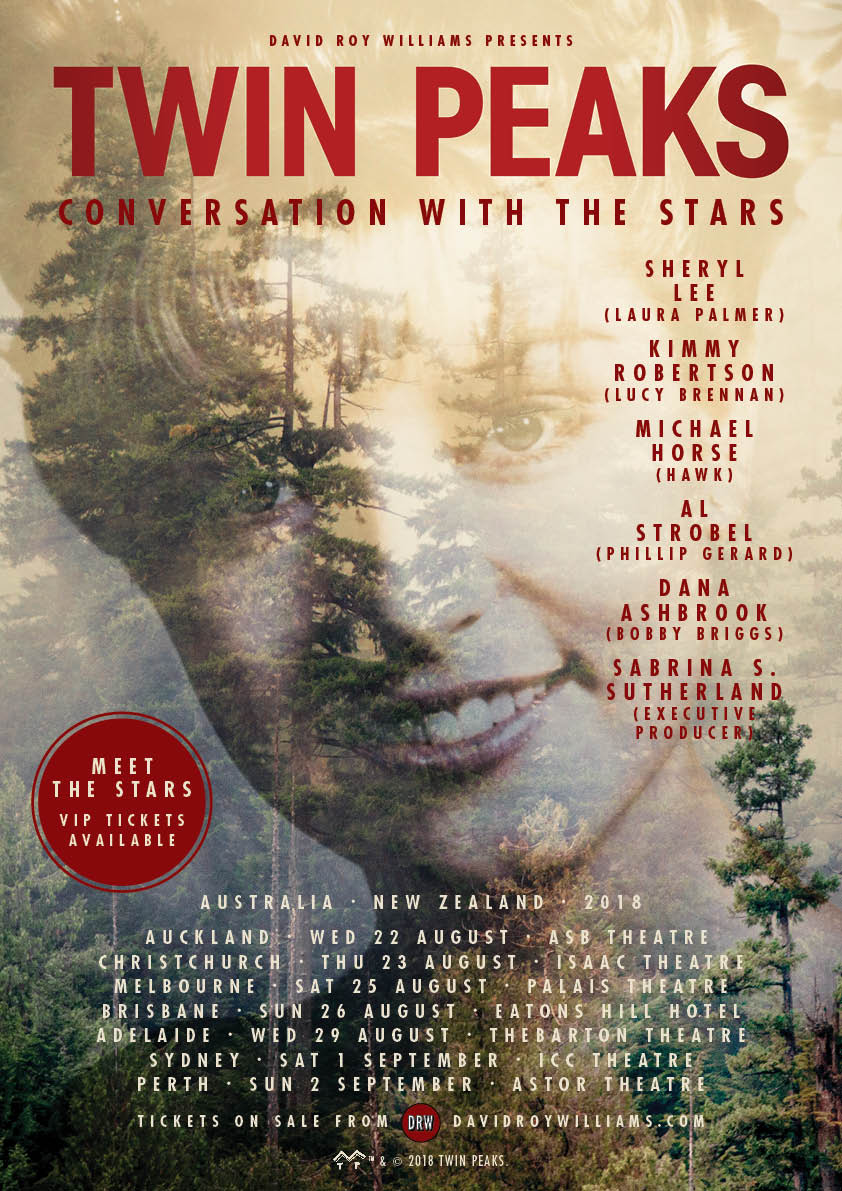 In an Australian and New Zealand first, five of the stars of TWIN PEAKS, Sheryl Lee, Kimmy Robertson, Michael Horse, Al Strobel, Dana Ashbrook and the Executive Producer of Twin Peaks: A Limited Event Series, Sabrina S. Sutherland, will visit Australia and New Zealand for an exclusive and unique evening in CONVERSATION WITH THE STARS, now also featuring THE MUSIC OF TWIN PEAKS performed by Electric Moon.

In a mind-blowing development, David Lynch will answer questions directly posed by fans face to face, as part of the Twin Peaks Conversation With The Stars tour.

David Lynch will skype in live to each show and answer questions submitted by VIP Platinum /Gold ticket holders – some extremely lucky fans at each show will be able to look the man in the eyes and ask their question directly.

TWIN PEAKS is the American drama television series created by David Lynch and Mark Frost that premiered in 1990 and returned in 2017 as Twin Peaks: A Limited Event Series with many of the original cast members. The series gained a cult following and has often been listed among the greatest television series of all time.

In 1992, a feature film, Twin Peaks: Fire Walk With Me, was released and served as a prequel to the television series.

Presented under license from CBS Consumer Products and Showtime, the Australian and New Zealand dates will be a celebration for fans of this iconic television series to hear first-hand of some amazing in front of camera and behind the scenes moments of filming. VIP Meet and Greet tickets will also be available providing fans an opportunity to get an autograph and photo with cast members.

SHERYL LEE is an American actress who came to international attention for her performances as Laura Palmer and Maddy Ferguson in Twin Peaks. Sheryl also appeared in the movie and returns for the 2017 revival.

KIMMY ROBERTSON is best known for her role as Lucy Moran in Twin Peaks.  She has also been the voice of many animated movies including Beauty and the Beast and television series including The Simpsons, Gravedale High and Batman: The Animated Series.

MICHAEL HORSE is the actor who played Deputy Hawk. Other acting credits include The Legend of the Lone Ranger, and Passenger 57, and is a highly respected ledger painter known for his portrayals of Native Americans.

AL STROBEL is the actor who plays Phillip Gerard, onetime associate of BOB and now a resident of the Red Room. Al has appeared in every season on Twin Peaks, as well as Fire Walk With Me. Other film credits include Ricochet River and Child Of Darkness, Child Of Light.

DANA ASHBROOK plays Bobby Briggs in all series of Twin Peaks and Fire Walk With Me. Other television credits include Charmed, Dawson’s Creek, Blue Bloods and Chicago PD.

TWIN PEAKS – CONVERSATION WITH THE STARS