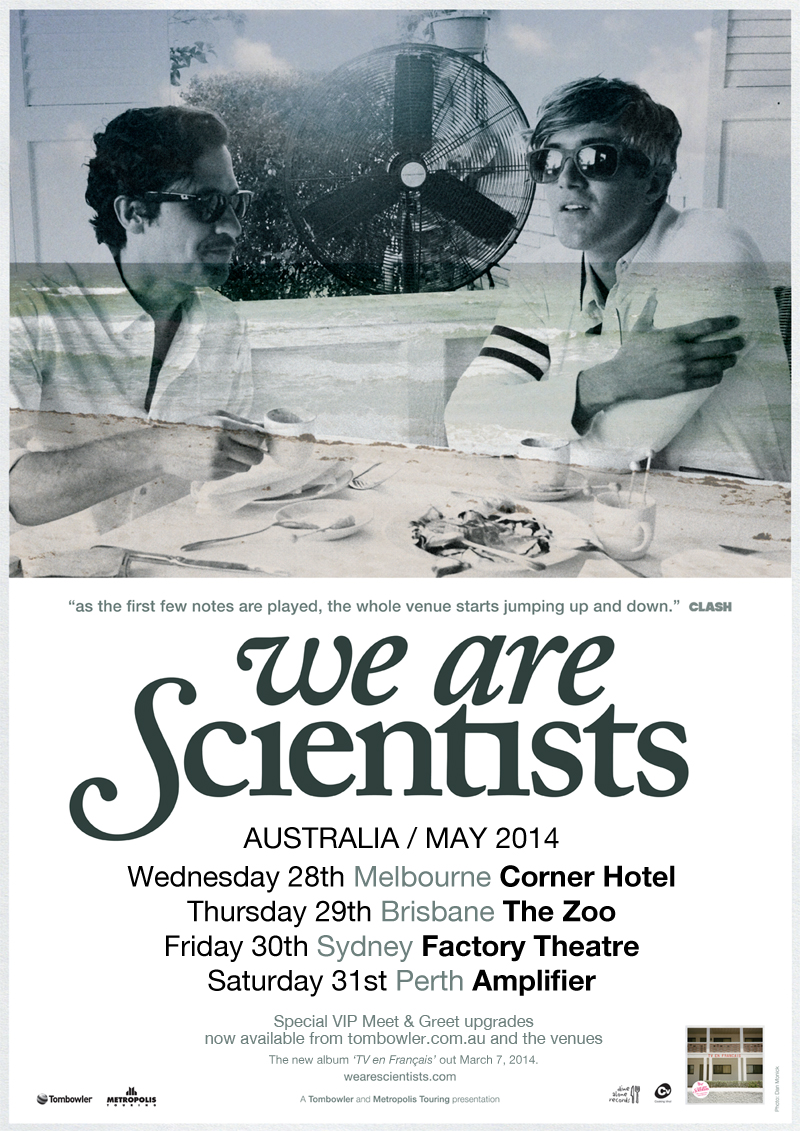 When the New York indie-rock outfit return to Australia, they are promising to bring the noise that brought them to international fame by playing the lion’s share of tracks from their air-guitar inducing classic album, ‘With Love and Squalor’, right through to tracks from the brilliant new album ‘TV en Français’.

Purchasers of the Deluxe Ticket will get exclusive access to We Are Scientists on the day of the show including the opportunity to attend the soundcheck, a chance to meet the band, an exclusive 4 track CD, and best of all, enjoy the Extended Play bonus songs show – an intimate performance of four songs just for their biggest fans.

We Are Scientists’ second album, ‘With Love and Squalor’ catapulted them into the hearts of many an indie-kid in 2005.  Their raw-energy and comical charisma soon lead to their brand of ruckus being spread far and wide across the UK. This energy barraged its ways over to the shores of Australia, where the indie-rock club scene was thriving, and people couldn’t get enough of the US 3-piece.

The infectiously frenetic guitar riffs, punchy as all hell lyrics and tracks that became anthems of that year, earned ‘With Love and Squalor’ the title of#33 in the NME Albums of the Year in 2005.  Tracks like ‘Nobody Moves, Nobody Gets Hurt’, ‘It’s A Hit’, ‘Great Escape’, and ‘Cash Cow’, laid the foundations for what would be an iconic album of that year.

We Are Scientists’ biggest hit ‘After Hours’ appeared in March 2008, quickly followed by the Number 11 UK chart album ‘Brain Thrust Mastery’ which also included the single ‘Chick Lit’. ‘Barbara’ was released in 2009 with the featured single ‘Rules Don’t Stop’. Double A-Side single ‘Something About You’ / ‘Let Me Win’ was released in 2012 and the ‘Business Casual’ EP featuring ‘Dumb Luck’ appeared in October last year to prime fans for a brand new album.

In May 2014, We Are Scientists will be returning to Australia for the first time since 2008, performing all the classics from ‘With Love and Squalor’, all the hits from their entire catalogue, PLUS the Australian debut of tracks from ‘TV en Francais’ including the latest single ‘Make It Easy’.

We Are Scientists’ live shows are something to behold; known to be full of hyper-active indie-rock dance-floor classics, mass sing-a-longs and hilarious in between song banter, We Are Scientists are one band you don’t want to miss.