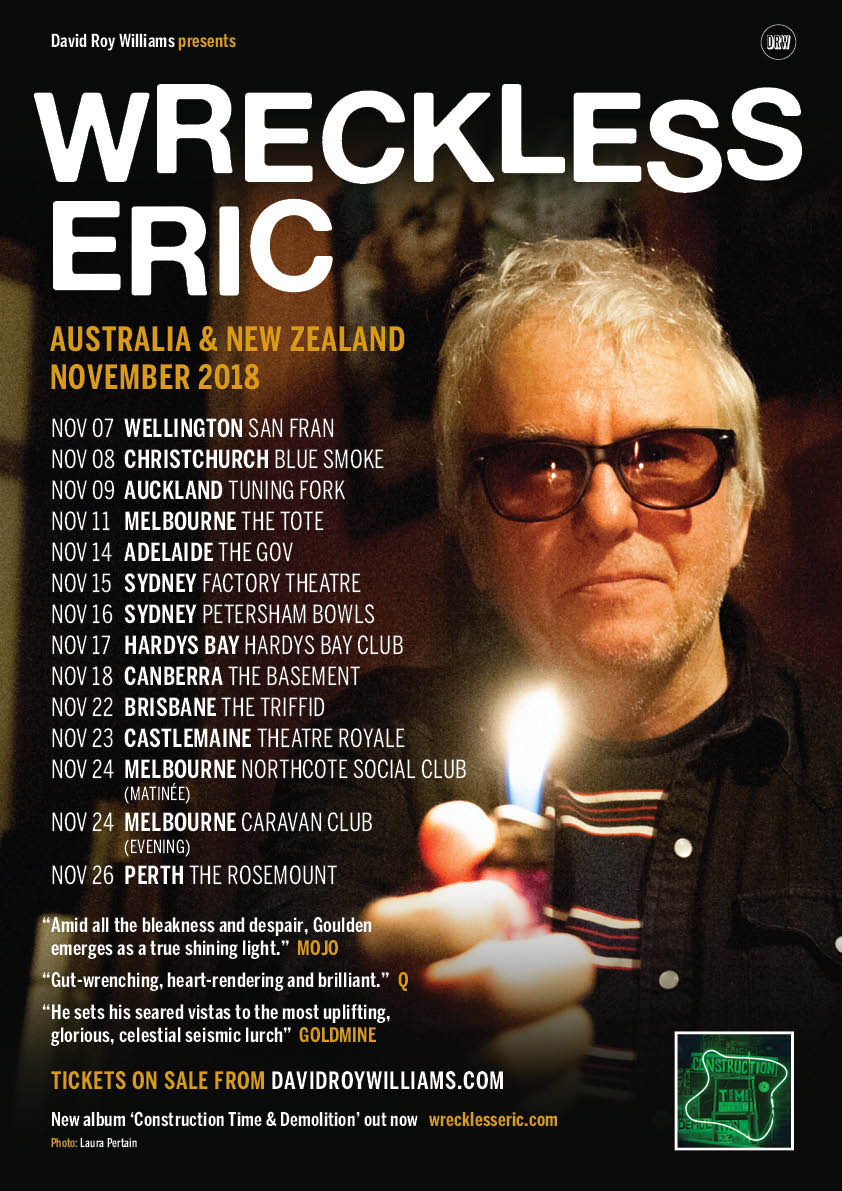 Talk about Wreckless Eric and what immediately comes to mind is his enduring hit Whole Wide World – covered in stadiums and sheds from Aberdeen to Alabama – but there’s a whole lot more to the story than just that.

With over 40 years of recording and touring behind him he shuns the dictates of nostalgia and doesn’t do comebacks for the simple reason that he never went away.

Except maybe where the Antipodes are concerned.

An original Stiff Records artist in 1977 alongside Elvis Costello, Nick Lowe, the Damned and Ian Dury, Wreckless Eric is one of England’s great underground songwriters. His classic “Whole Wide World” has been covered by the Monkees, Green Day, the Replacements, the Proclaimers, Will Ferrell (in Stranger Than Fiction) and even Marilyn Manson. Mental as Anything, whose Reg Mombassa & Peter O’Doherty are special guests for one of Eric’s Sydney shows, had a hit with the song themselves in the ‘90s. It stands alongside the Only Ones’ Another Girl Another Planet and the Undertones’ Teenage Kicks as one of the evergreens of the punk era.  His other hits from that time include Semaphore Signals, Reconnez Cherie, Hit & Miss Judy, Broken Doll and A Pop Song.

For his early work alone he deserves his place alongside Ray Davies, Robyn Hitchcock, Kevin Ayers and Squeeze’s Difford & Tilbrook as one of England’s great iconic songwriters, though comparisons are beside the point because, like all great artists, he has something entirely unique.

In 1981 Wreckless Eric / Eric Goulden left Stiff Records, turned his back on mainstream success and went underground. He formed a fiercely independent garage band, The Len Bright Combo, with two ex-members of The Milkshakes and released a couple of DIY albums. A string of completely homemade albums followed – Le Beat Group Electrique, The Donovan Of Trash, 12 O’Clock Stereo, Karaoke, Bungalow Hi, each with a unique character. Though his work was often derided and frequently misunderstood he toured relentlessly, playing to small audiences across the UK, mainland Europe and the United States.

In 2006 he formed a band with his wife, the American songwriter and musician Amy Rigby. They made three albums together as Wreckless Eric & Amy Rigby and carried on the non-stop touring until 2015 when Fire Records reissued Eric’s post-Stiff Records output and a new Wreckless Eric album, ‘amERICa’, to critical acclaim.

Eric’s post-Stiff work has had an impact on a younger generation of artists, including bands such as the Pink Tiles, Dick Diver, Scott & Charlene’s Wedding and the Girlatones, members of whom will be opening shows for Eric on his Antipodean tour this November.

Wreckless Eric has not toured in Australia and New Zealand since 1980. He says he was busy, it was a long way, and nobody ever asked him.

Eric will perform completely solo with acoustic and electric guitars – he has no need of a band, so please don’t ask – his shows are loud, dissonant, lyrical, gently melodic, uplifting and strangely moving. He plays material spanning his whole career, including tracks from his acclaimed new album Construction Time & Demolition, a musically complex trawl through the psyche of a man with plenty to say and nothing to lose.